Does a celebrity posing nude ever draw attention to anything…

…besides the fact that they’re plum buck naked? 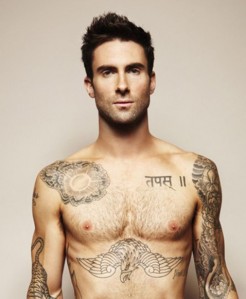 Adam Levine, front man for musical group Maroon-5, is the latest superstar to jump into the fray.  He appears in the latest issue of Cosmopolitan UK without a stitch on.  His pitch?

Everyman, a campaign dedicated to raising awareness for testicular and prostate cancer. It funds the Everyman Centre in Surrey, Europe’s only male-centered cancer research center.

In deference to Cosmo’s readers,  that particular region of Levine’s body is artfully blocked in the shot by the hands of his girlfriend.  The rest is covered by tats.  Lots and lots of tats.

Are these photos a victory for cancer awareness?  I hope so.

Personally, I think the tattoo industry may get the biggest bang from Levine’s beefcake.