As funny as 30 Rock is each week, I have to ding the series for often being a bit too…outrageous for its own good. 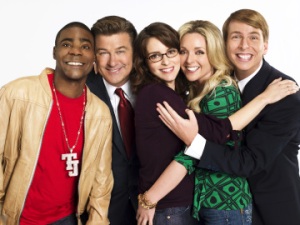 For every episode that is relationship-centered and hilarious — Liz’s recent break up with Carol on the plane, for example — there are two more that are simply…weird.  Laughs generated by ridiculous situations seemingly pulled out of a hat and slapped upon the TGS show-within-a-show format.

But last night’s episode — where Liz is painted as a ‘woman hater’ — was nothing short of brilliant.  Not only because it focuses on her relationship with a new writer and is inherently more ‘real.’

It speaks to a reality for all women.

From childhood, we are programmed to compete with other women.  Our first competition?  Our mothers…for our father’s and siblings’ attention.

That’s why our moms tend to be painfully honest with us.  Because that’s what competitors do.  Even the ones that love you.

Then we are launched into a world filled with not-so-loving females.  Girls who are our competitors for school achievements.  Boyfriends.   Jobs.  Husbands.   And then we become mothers of daughters ourselves….the competition continues.

Thank you, 30 Rock, for pointing out the funny — and not so funny — in real life.  Your show is better for it.

Hopefully a few people stopped to think after the laughter died away.