While The Sticky Egg’s moniker is pure poultry, I have never attempted to hide my preference for pork. 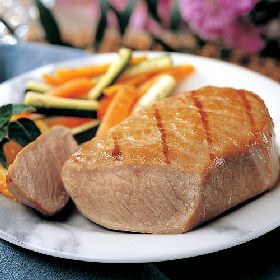 From its good looks on your breakfast table to the Red Bull-like jolt it can give your day, bacon’s the bomb.  And pork chops?  Well…let’s just say if they’re on a restaurant menu, I have a hard time not ordering them.

I guess it’s really not that surprising for a girl whose home town (Fancy Farm, Kentucky) is in the Guinness Book of World Records for holding the Largest One-Day Barbecue in the World — that’s pork barbecue, my friend.

“Pork — the Other White Meat”

Sorry, board members — I’m not.

Look — I appreciate the fact that you’ve stopped comparing pork to chicken.  By now folks get the fact that pork is a lean, healthy — and let’s face it, tastier — alternative.  And now you want to create a more emotional connection.

But I’m pretty sure a trite phrase like “Be Inspired” is going to elicit quite different emotions than you planned.  Emotions like scorn.  Derision.  Boredom.  All of which will lead viewers to first mock the lame ads and then, worst of all, ignore them completely.

At least the old tag line showed a spark of creativity.  The new one sounds like it was penned during a ten-minute elevator conversation (although the dollars spent on its creation would probably make me cry).

National Pork Board:  If you truly want pork lovers to “be inspired” in the kitchen, why not start by inspiring them?