I have discovered the next Broadway hit.

It happened last night, quite by accident, while I was still basking in the glow of Sunday’s incredibly entertaining Tony Awards.  (A lineup of stellar performances + The Book of Mormon’s awards domination + the incomparable Neil Patrick Harris = GREATNESS.)

I plopped down on the couch for an evening of sloth, and what did I find on HBO?

Did you see it?  This 2003 romantic comedy was an homage to the 1960’s sex comedies starring Rock Hudson and Doris Day.

In Down with Love, Renee Zellweger plays a bestselling author who advises her readers to ‘give up men,’ a credo much at odds with journalist Ewan McGregor’s playboy lifestyle.  The two get involved in a relationship that is not what it appears.  Hilarity ensues.

I love this movie.  The script is smart and funny and filled with double entendres.  (These are my people.)  In one scene, the two leads work out separately yet together via split-screen; the effect is very, very naughty. 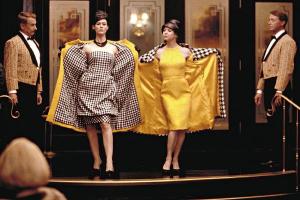 The costumes and set design are amazing as well.  The characters live in a New York City that alternates between cotton candy pastels and race car brights, not unlike the world imagined in this year’s Broadway smash How to Succeed in Business without Really Trying.

I imagine Down with Love as a musical; the movie was not, although Zellweger and McGregor did sing the title song over the movie credits.  And both can sing.

Oh, to have Ewan McGregor on Broadway.  Tony-winner David Hyde Pierce was in the movie version as well.

This may be my best idea to date.  Let’s bring Down with Love to the Great White Way!

One response to “Here’s to love”