Have you seen this promotional pic of the new movie The Descendants?  Did you wonder what George Clooney was hiding from? 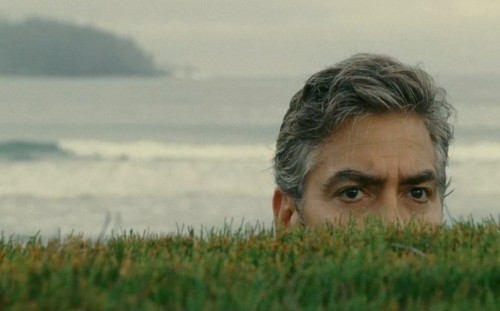 Turns out his co-stars.

I saw the movie this afternoon with my friend Caroline who is visiting from Kentucky — George Clooney’s hometown, in fact.  (She knows the man.)  So we were excited to see if the movie and George himself deserved all the Oscar buzz.

Apparently director Alexander Payne spent all his money on the big man himself and surrounded George with a TV movie-of-the-week cast.  I mean, Shaggy from Scooby-Doo as his co-star?  Get real.

While there were excellent turns by Shailene Woodley as George’s oldest daughter Alexandra and Beau Bridges as his cousin Hugh, no one else really measured up to George or the script.

Hey Alexander — when you center a film around a sick room, you might want to make sure your cast is healthy first.