Finally — a reason to watch an awards show red carpet! 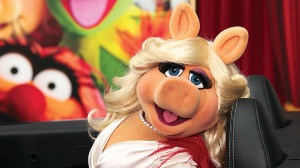 The BAFTA Awards — the Brits’ Oscars, if you will — announced that Miss Piggy will be their official red carpet host for this Sunday’s awards ceremony.

Now there’s a red carpet interviewer who’s bound to ask something more interesting than ‘Who are you wearing?’  Heck, I bet Miss Piggy will proposition a celebrity or two (George Clooney) and throw a punch if said celebrity’s leggy girlfriend (Stacey Keibler) gets in the way.

Plus, it’s nice to see a television host who hasn’t starved herself to death to get the job…or filled her face with Botox or other fillers to maintain a youthful appearance.

(I’m pretty sure she’ll just put on a new head for the broadcast.)