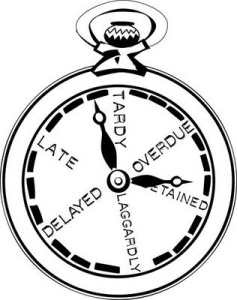 But when does late become something much, much more?

I mean, when can you no longer simply say “I’m late”…and instead admit that you have a serious problem?

That you are a bad planner?  That traffic isn’t really working against so much, but that you aren’t giving yourself a realistic amount of time to tackle it at this time of day?  When it happens again and again and again?

In New York City, no less??

Coming soon in this space — Am I impatient?