A weekend in the country

Oh, Austenland — I wanted to love you.

You had it all.

A costume drama dressed up as romcom. Subject matter I enjoy ever so much. And a cast with the chops to make movie magic.  So what went wrong?

I blame the director.

The premise was great fun — a Jane Austen addict on a total immersion vacation — and it’s not like everything missed the mark.  But some of the actors were doing slapstick and others were letting the humor happen more naturally.

And in the same scenes, that difference was rather jarring. 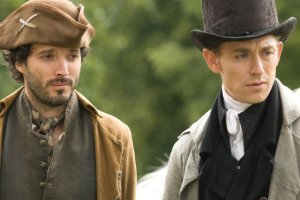 I did develop a crush or two — on JJ Feild, who portrayed Mr. Henry Nobely (right), and Bret McKenzie as the estate worker Martin (and who you may recognize from Flight of the Conchords).

So, while the movie did not win my heart like a Sense and Sensibility or Pride and Prejudice, the men did.