I’m taking a class at NYU this fall and ordered my textbooks from Amazon. When a delivery arrived this morning, I broke open the box, expecting to see books.

On top of the air bladders was a thank you note for my order with two small sample packs of Mike and Ike.

I thought this was a new Amazon policy, which I — a sugarholic — was immediately behind.

But once I dug a little deeper, I realized the shipment was actually an early birthday gift from Peeps & Company, which makes Mike and Ike (and Peeps, as you might imagine). 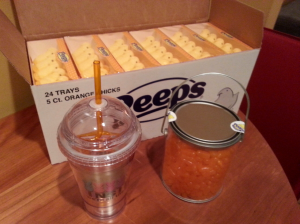 I was lucky enough to receive both!

But I still think it would be a great idea for Internet merchants like Amazon to include a candy surprise in their shipments.  It was only a tiny package — maybe 8 pieces — but it still put a smile on my face.