I spent nine hours today at the US Open tennis tournament — the hottest day this year in New York City.

Thank goodness I had a big hat.

During that time, I watched a lot of tennis, both singles and doubles, on all three major courts at the Billie Jean King Tennis Center.

My pick for the match of the day? 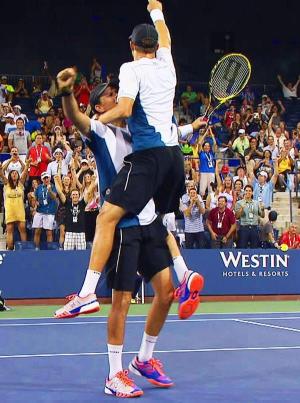 The Bryan Brothers win on the Grandstand

It was moved from Louis Armstrong because the Cilic / Simon match ran five sets.  And as soon as word got out, people started streaming into the smaller court where every seat is a great seat.

Five guys had appointed themselves cheerleaders for the Bryan Brothers and periodically treated the crowd to custom cheers that always got a huge ovation. The challengers, Verdasco / Marrero, had their fans, too; I would just need a translator to tell you what they were saying.

The first set was classic Bryan Brothers, a quick 23-minute hold. But the momentum shifted in the second set, and Ver/Mar claimed it.  The third was back and forth until the Bryan Brothers got the break.

I’m pretty sure our crowd could be heard throughout the Tennis Center.