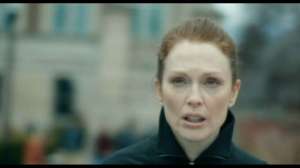 I saw the movie on Sunday, so I know why.

Her portrayal of a 50-year old Columbia University professor with early on-set Alzheimer’s is amazing…because you can’t see what she’s doing.

She simply has Alzheimer’s.

And everyone around her in the movie looks like they’re acting.

In the movie scene represented by the still above, Julianne’s character is out running in her New York City neighborhood, and is suddenly lost.  She starts to hyperventilate, and everything becomes an unrecognizable blur. The audience is in there with her.

I won’t pretend this movie is easy to watch, but I think it’s important to see.