Since my post last night, my friend Wendy Molyneux (who also happens to be a writer for Bob’s Burgers) has, as of 3pm ET today, raised almost $8,800 for CureSearch.

Because she hates Entourage and really does not want to see the movie.  And hates pediatric cancers even more. 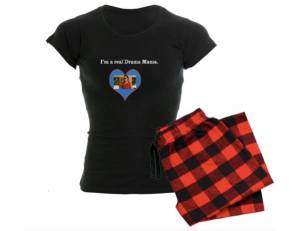 To up the ante, she has promised to wear this lovely ‘drama mama’ pajama ensemble to the theater if she raises her goal of $10,000 by midnight tonight PT. She’ll also likely tweet her agony to the masses, and that will be hilarious.

So give if you can.  We both appreciate it.

Update to the update:

We did it!  Wendy has already well-surpassed her $10,000 goal!  But she is giving you new reasons to give (besides the obvious to help fight cancer).  Here is her latest post:

Well, this has not worked out very well. Thanks to all of the terrible people I know and a bunch of awful strangers I’ve NEVER EVEN MET WHO CARE ABOUT CHILDREN’S CANCER, I’ve reached 10K in one day. If this madness continues, I am going to have to drink movie soda out of a Turtle sipper my effing sister made (if this hits 15K),  AND if for some reason this goes on all the way to 20K I am going to have to see this movie twice. TWICE. This is a mess. All I know is this nightmare will end on June 3rd when Entourage premieres and the world as we know it ends. Screw all of you and your goddamned BIG HEARTS. You are the worst.

Told you she was hilarious.