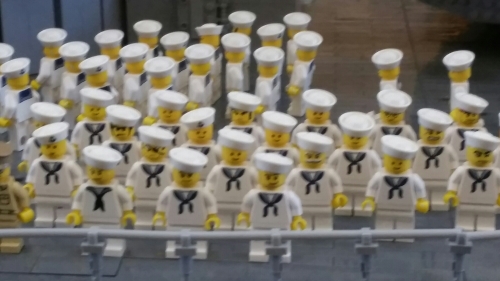 Will it go ’round in circles

One of my Twitter buddies mentioned today that, as a kid, he wanted to make a career out of creating the images below. 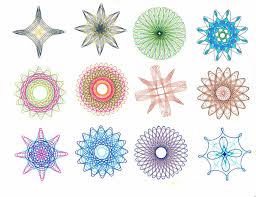 They’re Spirograph, which was one of my favorite toys as a kid.  (If you haven’t heard of it, well, you’re probably not a Boomer.)

We used pen and ink on paper and the special Spirograph tools to create those images — this was years before laptop computers or Photoshop manipulation were common.

They were all handmade. 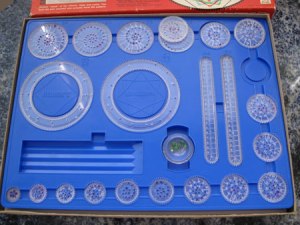 Looking at all the discs and circles in the kit, I am itching to play with it again.  It was a lot of fun.

Wonder what became of our Spirograph?

Congratulations to Jennifer B., who correctly identified yesterday’s featured image:

I have never played the game myself; I’ve only seen it featured in ‘classic game collections’ in stores and catalogs.

I thought it was dead.

But then I came across this photo in an article about the English and American Tiddlywinks Associations…for adults.

They hold annual tournaments.  They have websites.  They publish e-newsletters.

When we were young, my sister and I spent many a fun-filled afternoon playing “camping” with our Barbie dolls — and our brother’s GI Joe action figures — in our family’s formal living room.

(Other than Christmas, it was the best use of that room.)

The green carpet was obviously the grassy forest floor. We used Kleenex as sleeping bags. And Dr. Seuss books tilted open were the perfect tents. Plus, GI Joe had a jeep, so there were lots of four wheelin’ and other shenanigans.

Sock it to me

I used to watch her on Saturday morning television when I was a little-bitty thing.

I’m kinda surprised she is still around, but according to the Google machine, the daughter of Lamp Chop’s creator still performs with the puppet, mainly for the military.

In fact, Lamp Chop was given a field promotion to three-star general.

Not a game for all ages

My friend Beth and I were browsing the clearance items at Barnes & Noble after lunch today, when we came upon this gem: 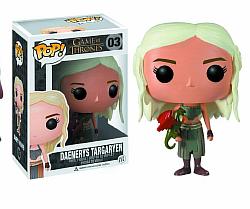 In the children’s section

I looked — these POP! toys are also prominently featured on the GOT website homepage.  Are the show producers really trying to encourage small children to watch this series?

I readily admit to not watching Game of Thrones.  But based on the promos, marketing materials and magazine articles I have seen, I feel I can confidently say —

This isn’t a kiddie program.

Craig Ferguson doesn’t watch it either.  But when he interviews cast members during their visits to The Late Late Show, he always shakes his head in regret saying, “There are boobies on that show!”

Which kinda makes ya think babies shouldn’t be watching…right?

When I was in Singapore this past weekend, I thought about flying on to Australia.  It’s only a seven-hour flight.

This guy made that voyage by water…in the opposite direction.

Rubber Duck, a ginormous piece of conceptual art by Florentijin Hofman, was last spied bobbing about in Sydney’s Darling Harbor. Today the inflatable duck, which measures 46 feet tall and 55 feet long, arrived in Victoria Harbour in Hong Kong for a month’s stay with a little help from a much smaller tug boat. 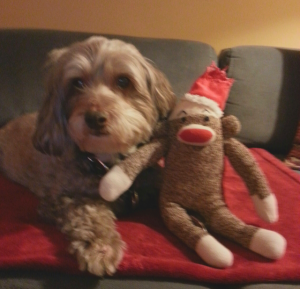 Exhibit B:  Rory with Sock Monkey

Given to Rory on Christmas Eve 2012.  Brand new.  Ball on Santa hat chewed off within moments of gifting.

That’s Snuffles on the left — on the right, the brand spanking new version from Gund. I saw a little girl carrying him in a shopping bag near the ice rink. She had ‘adopted’ him from the Central Park Zoo.

What a difference two decades can make.

The newer version is obviously fluffier and puffier and whiter, his ears a bit perkier, his eyes shiny and direct.  But his mouth is stitched down flat, whereas my Snuffles smile is a moveable thread…so he can smile, frown, smirk, pout — whatever he’s feeling that day.

I mean, look at that face — so expressive.

But I’m sure after ten years or so, that new Gund bear will start showing some personality, too.