We have had more than enough reasons of late to question our leaders and institutions. So, perhaps you’re not ready for yet another in your entertainment viewing. 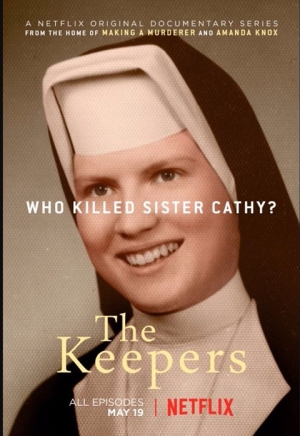 But I still must recommend The Keepers on Netflix.

This seven-part documentary series examines the unsolved murder of Sister Cathy Cesnik, who was abducted and killed in Baltimore in 1969 at age 26.

The circumstances surrounding her death are just one element of the story. The apparent cover-up by the church and police is even bigger and more disturbing.

And the entire investigation of this ‘cold case’ was led by Gemma Hoskins and Abbie Schaub, retirees and former students of Sister Cathy at Archbishop Keough High School.

The information they bring to light is shocking and sad — even more so because it took this long.

Sister Cathy Cesnik — and all the students at Archbishop Keough — deserve justice.

I would never wish ill on anyone or any endeavor, but…

NBC is getting what they deserve.

They tried to go cheap.  They pulled the pricey scripted programs that typically have filled out their schedule from 10-11pm and played the talk show card instead.  It’s really not that different from reality programming… NBC’s ‘hook’ (Leno) just wasn’t very original.

Since the premiere of “The Jay Leno Show” in primetime four weeks ago, nightly viewership has dropped from his debut of 12 million to roughly half that at 5.6 million nightly.

As a point of comparison, that’s about one-third of the viewers that NBC was able to attract last year with its schedule of dramas from 10-11pm.

And the network numbers aren’t the only ones that are hurting.  The NBC affiliates nightly news programs, which immediately follow Leno’s supposed laugh fest, are also suffering.  Baltimore, Kansas City, and even Jay’s hometown of Boston are reporting lower numbers…and they aren’t too happy about it.

As you may recall, the general manager of WHDH in Boston originally didn’t want to take Leno’s show at all, but changed his mind after NBC threatened to pull their affiliate status.  Turns out his instincts were spot on.

And NBC’s instincts?  Not so good.

Rumor has it that Comcast is going to acquire NBC Universal and will dump Leno well before the previously agreed upon 12 months.