The Ides of Carson

A friend had a brilliant inspiration during Dancing with the Stars last night that she posted on Facebook.  Today I devote The Egg to officially launch her campaign: 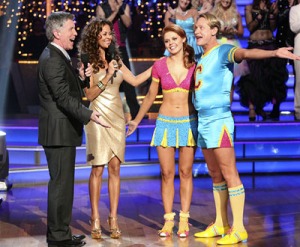 BERGERON-KRESSLEY
Dancing with the Stars Co-Hosts

That’s right — Brooke Burke out; Carson Kressley in.  If you watched last night’s results show, we all got a taste of exactly what that might look like.

Fun.  High energy.  Witty.  Filled with the unexpected.  All the things that an evening of hosting — and conversation, I would guess — with Brooke Burke is not.

Full disclosure  — I’ve never been a fan of Brooke.  I wasn’t when she started hosting; I’m not now.  While she is lovely to look at, I just don’t think she has much else to offer.

If she were flipping letters on Wheel of Fortune, that would be fine.  But DWTS requires she be quick on her feet, and she’s simply not.  Standing next to Tom Bergeron — the best host in the biz — well, it’s just sad.  And she’s not getting any better.

But Carson and Tom together?  Totally different personalities, of course, but both big.  Both bold.  Both smart as a whip.  And funny?!

Oh, I think America would buy tickets to that party.