Did you know Cracker Barrel has an online store?

I was dozing on the couch and a commercial woke me up with the news.

For someone like me who doesn’t live near the Barrel, this is good news. Unfortunately you can’t order those nasty good Southern veggies online…or have Uncle Herschel’s breakfast delivered hot to your door.

But a ceramic owl spoon rest is nice, too.

Somewhere, a monkey is smiling

A good friend of mine — a Chicagoland native — recently moved to the South, and relayed an experience on Facebook that made me smile.

He was looking for a banana and asked a woman at a fast food counter if they had any. Her reply? 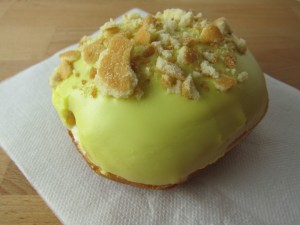 “We have a banana pudding flavored doughnut.”

Now, it took my friend’s non-Southern brain a while to process this bit of information, but the banana pudding lover in me was PSYCHED.

Banana pudding is one of the greatest desserts on the planet.  (They attempt to make it where I live now, but you have to go to the deep South to get the real thing.)

While I’m not the biggest fan of doughnuts as a rule, COME ON —

Ya gotta appreciate their ingenuity!!

Sure you do — the sausage guy, right?

Always reminding you to eat a good breakfast.  Sometimes is being circled by the planets.

Well, today, be on the lookout.  He may be pushier than usual.

You may even notice him loitering around….trying to insert himself into your lunch — dinner, too.

And that’s because it’s….

Of course, you may have already heard about this from William Shatner. He might be wandering around your house, too.

If you see something, say something.  And have a slice!

[Insert string of expletives here] WHAT!??!??!  ARE YOU KIDDING ME?

No Pop Tart flavor has ever or will ever exceed the warm, Saturday-morning, better-than-even-grandma-could make goodness that is Brown Sugar Cinnamon Pop Tarts.

The original un-frosted version is even yummier, if you can wrap your brain around that.

Culturalist — I know it’s not your fault.  You aggregate lists submitted by your users.  (You just might want to take a closer look at your users…ya know?) 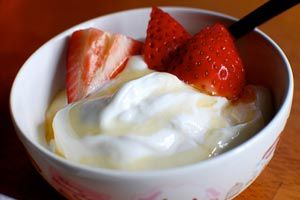 Oh, I’ve tried your wares — different brands, different fruit-and-yogurt combos, too — and it’s true you don’t taste like other yogurts…

And I wouldn’t choose to eat anything that has turned for breakfast, lunch or dinner.

I did add the fruit. Didn’t help. I added sweetener, too…and then wondered why I was going to all that trouble when I can simply eat Activia when I have a hankering for yogurt.

I’ll admit, John Stamos is a very appealing spokesperson for Greek yogurt, but he doesn’t deliver, either —

When I bought his brand, he was nowhere to be seen.

Maybe that accounts for the bad taste in my mouth.

It takes a village

Spock was famous for his Vulcan mind meld. 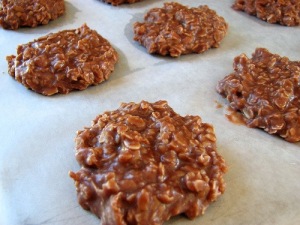 I replied that his aunt would be proud — not me, my sister Lou.  She has made and eaten many batches of the slightly ugly cookie…even when they didn’t really turn out.

I mean, look at them — does it really matter?

My nephew ‘favorited’ my tweet, and I shared the conversation with my sister via Skype chat (knowing she doesn’t check Twitter as often as I do).  Now she is inspired to make some of the chocolate morsels for the first time in years!

Did you start your morning right with a cronut?

If you answered ‘yes,’ you’re definitely a New Yorker, because this brand new croissant / doughnut hybrid is only available here in the Big Apple…at the Dominique Ansel Bakery on Spring Street.

Why is everyone crazed for cronuts?  They’re fried, cream-filled and sugar-coated.

Set your sensors on stun.

When the bakery opens at 7:30am, there is already a long line.  They’ve had to set a limit of six cronuts per person…and they go for $5 a pop!

Rumor has it ‘influential’ food bloggers can get them delivered…

Rory and I are watching Chopped, enjoying some couch time together post-Singapore, and one of the basket items is… 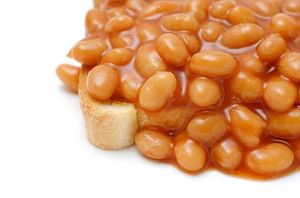 Of course, there is much discussion about how the beans are going to work with the striped bass, yadda yadda yadda. But it immediately took me back to Monday morning in Singapore when I ordered your typical bacon-and-eggs breakfast before my training session, and the hotel served them with a side of baked beans.

That woke me up.

But I have to say — they were awesome.  Sweet and smoky in flavor, the baked beans were perfect with the bacon.  In theory I guess it’s not that surprising, but it was a first for me.

May not be the last.

A lot of famous folk have been talking eating disorders lately.

Demi Lovato appeared on Katie Couric’s new talk show to discuss hers, which prompted Katie to spill the beans about her own bulimia.  Lady Gaga used to have one, too.  So did Stacey London of What Not to Wear.

It’s like eating disorders — or admitting to having had one — has become the fashionable thing to do. 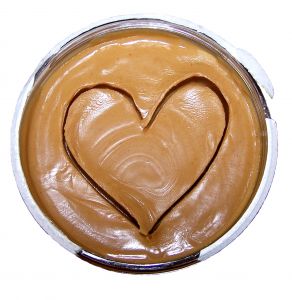 I like it for breakfast on toast.  I like it for lunch on bread or crackers.  I like it with chili (on the aforementioned crackers) for dinner.  Or if there’s no chili about, I’m good with the peanut butter and crackers again.

And if there’s no bread or crackers, it’s pretty great right out of the spoon.

Some people might consider this an eating disorder.  I think of it as dedication to a childhood friend who has proven himself again and again.

(But I’m not sure that is on trend right now.)

Brian Williams, you have a doppelganger.

And it only took me 14 years to notice.

This morning, while avoiding the news programs, I happened upon the 1997 Bette Midler-Dennis Farina farce That Old Feeling. It wasn’t that good the first time I saw it, but it’s still better than watching Today. So I let it run in the background while I ate breakfast and checked email.

A young James Denton plays the groom in the wedding that begins the film. I had kinda forgotten that detail. So today I did a serious double take — it looked like NBC News anchor Brian Williams on screen!

Now, I’ll admit, when you look at them side-by-side, the differences are more apparent.

James — or Jamie as he called himself at the time — has more even features and works it a bit harder in the smolder department.   (He was on Desperate Housewives, after all; he has a lot of practice.)

But if I didn’t know who the two men were, and someone introduced them as brothers, I would totally believe it.  Wouldn’t you?

No need to thank me when ‘Doppelganger Day’ rolls around on Facebook next year, guys.  It was my pleasure.