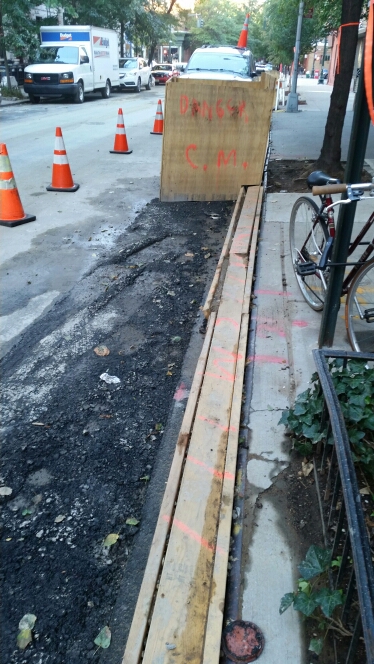 Rory and I were walking to Central Park this morning when we encountered this construction site on the ’30 Rock Block’ (where they used to shoot the exterior of Tina Fey’s apartment).

Is this a thing?

Even with the additional clue of the Con
Ed truck, I don’t know what that means.

Earlier this evening a friend on Facebook posted the challenge:  “Favorite three TV shows of all time”  —

At first glance, I thought it an easy question.  Then I noticed the comments were few in number; many people had only listed one or two shows instead of the requested three.

After spending some time on the topic, now I understand why.

My first favorite was immediate and top of mind: The West Wing.  From episode one until the the drama drew its last breath, I was one of its biggest fans and most vocal supporters.  It’s what television — and government, for that matter — should be.

Jed Bartlet is still my president.

My second choice is more of a sentimental favorite.  I wrote my television programming  paper on Cheers as a freshman in college and rightly predicted that it was a comedy that had long legs.

I also watched Cheers — perhaps not with the same religious fervor as West Wing — but until its end.  And it was way cool to eventually live just a few blocks from the Boston bar that served as its inspiration.

My third choice was the hardest one. I watch a lot of television, a lot of great television — House of Cards, Orange is the New Black, Breaking Bad —
but I decided, if I was honest, I should choose the show that turned me into a schoolgirl fanatic:

I have the DVDs. And the hardback companion. And the bound scripts. And a couple of pictures on my office bulletin board.

Yeah, that probably qualifies as a favorite.

Breaking Bad ends its incredible run tonight. At least, that’s what I hear.

I mean, I know it’s ending. I inferred the ‘incredible’ part. ‘Cause I never watched it.

Unlike my friends Jeff Drake and Wendy Molyneux, I haven’t attempted to binge watch every episode prior to tonight’s series finale. Nor have I felt like the’ last person in America’ who hasn’t watched Walter White and Jesse Pinkman’s meth odyssey in the desert.

(I knew Jeff and Wendy were out there.)

I actually felt kinda proud that I had held out all this time…although I had never planned not to watch the show.

But now I have Netflix.  Now I can.

So yesterday I watched Season 1 and began Season 2.  I am on an airplane headed westward as I type this, so all will be resolved by the time I land.  But if I hope to finish the series on my terms and not have the ending ruined, I will simply have to follow sage advice given to Ben Affleck after he was recently cast as the new Batman:

They are the joke of the entertainment community.  The redheaded stepchild of awards season.  The first awards show of the year, yet the predictor of nothing.

I mean, seriously — how could you not watch?

The only stars in the audience are the winners…it’s like they know ahead of time or something.  They sit in the audience, not good enough actors to hide their embarrassment at being there.  You will occasionally catch a smirk on their faces as they watch the opening number or winch at the bad writing.

Heck, in this year’s open, sung with enormous gusto by host Queen Latifah, one of the lyrics actually said:

“You can run, but you can’t hide from the People’s Choice Awards.”

Some of them even struggle to keep straight faces during their acceptance speeches, which are always a variation on the “this matters so much because it’s from you, the people” theme.

You can also count on the winners of the People’s Choice Awards — voted on by you, the people — to be about five years behind the critical choices of the more prestigious awards ceremonies.  For example, Hugh Laurie won Best Actor, Drama and “House” won Best TV Drama.  Both are great, but I think you would agree some newer shows have come along  — “Mad Men” or “Breaking Bad,” for instance — that deserve recognition.

Which begs the question: who is voting in the People’s Choice Awards?  Who are these people?  Whoever they are, they apparently stopped watching television quite a while back…and their taste in movies nearly always lands on the most blockbluster, family-friendly fare.

In fact, of all the awards shows, the People’s Choice Awards appears on the surface to be the most rigged…and yet, the people are supposedly doing the voting.

We simply can’t be trusted.