If you’ve spent any time on social media today, you may already know two great holidays have converged —

If you’re like me, this accident of the calendar seems like a natural combination. I mean, what better way to show that cute little squirrel in your backyard or local park that you appreciate them than a big ol’ hug?

Then again, maybe not.

Unless you have been avoiding social media, you have no doubt heard the shocking revelation from Sanrio that Hello Kitty is, in fact not a kitty:

Now, I could point out the obvious flaws in their argument — six of them to be precise — those very un-little-girl-like whiskers that stick out of Hello Kitty’s face.

How many little girl characters sport whiskers?  If they have a hormonal imbalance, maybe…but that’s not the stuff of your typical cutesy cartoon world.

But instead, let’s focus on the bigger question —

If this distinction mattered that much to Sanrio and to its legion of crazy cat lasses and ladies, they should have made it abundantly clear four decades ago.

This is my friend Wendy Molyneux and her sister Lizzie. 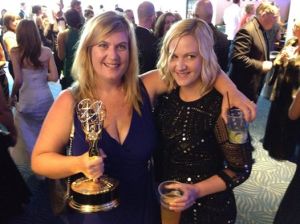 They are writers for Bob’s Burgers on FOX, and last night, they very deservedly won their very first Emmy Award!

This is just the first of many!

Yesterday a friend of mine on Facebook requested that everyone stop posting pictures and videos of fireworks.

“Thanks for your entries, but we get it already,” he said.

I guess it’s not surprising that some 235 years after the first Fourth of July celebration, it feels like nothing too original can be said about Independence Day, even on the relatively new social media.

So why not celebrate the awesomeness that has already been penned about our nation’s brave beginnings?

Now, there are some fireworks I think everyone can enjoy!

Gerry Matthews was the voice of Sugar Bear, who always sounded like Dean Martin to me.  (I think that was the point.)

Alas, Super Golden Crisp is no more.  Neither is Berry Berry Kix.  Or Cabbage Patch Kids cereal, E.T. cereal or New Kids on the Block cereal. 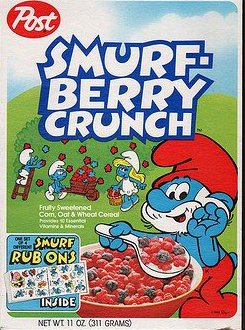 Even Smurf Berry Crunch is long gone, although the upcoming live-action movie may give it new life.  (Hope the rub-on tats come back, too!)

Commercials in Saturday morning cartoons made us simply have to have each and every one of them…for a little while, at least.

Enjoy this online tribute to 54 cereals we have loved and lost.

Which sugary classic do you miss the most?

Me?  I was always been a huge fan of Froot Loops.  And Frosted Flakes.  And Captain Crunch.  Sugary, sugary goodness that requires no milk — it’s an all-day treat in my book.

But, alas, while my favorites are still available on the shelf, I pass them over (most of the time) for more healthy choices.

At least we can still enjoy the cartoons…am I right?

I grew up and lived most of my life in the South and Midwest, where President’s Day isn’t really celebrated.  I mean — the banks close, and there’s no mail…but businesses stay open, and school kids never reap any benefit from the big day.

Now that I live in the Northeast — where President’s Day gets more attention — I find that I haven’t figured out exactly how to ‘get into it.’

In fact, when I think of President’s Day, Kansas City cartoonist Bill Whitehead comes to mind.  We worked together during my days at Hallmark Cards.

No one did a butt joke better than Bill.  One of my favorite cartoons of Bill’s was “The Other Side of Mount Rushmore”…which featured the presidents bending over, their butts prominently displayed.

In high school we knew — someday we’d have our revenge.

(They even made a movie about it.)

Now we rule the world.  Nerds and geeks created your computer and your smart phone and your mpg player and Facebook and Twitter and all the technology that today, you can’t live without.

It’s even cool to be a geek.  Geeks are sexy.  Geeks are reluctant spies like “Chuck” or good-looking renegade space captains like Mal Reynolds in “Firefly” or scientists taking their geekness to new levels like Sheldon on “Big Bang Theory.”

And geek fans?  They’re the coolest by far.  Everybody wants them — movies, television shows, cartoons, comic books — you name it.  They are the most sought after population on the planet…or so it would appear this week.

Comic Con, the comic book conference that up until a few years ago people only attended under fake names or the cover of darkness, is now the biggest show on the planet.  Major celebrities are in San Diego as we speak promoting their new movie, TV show, or animated series…and I think they still do comic books, too.

It’s insane.  I am so jealous that I’m not there….

Kennedys on a plane

I read today that Bobby Kennedy Jr. filed for a divorce from his wife Mary.

That’s too bad.  They seemed like such a nice couple…when I met them.

Yeah, you read it right.  I met Bobby and Mary Kennedy.  They sat next to me on a flight from Denver to Aspen.  We were all en route to the 2nd Annual US Comedy Arts Festival. I was on a research trip for Hallmark Cards; Bobby was going to introduce Garry Trudeau, his good friend and creator of the “Doonesbury” comic strip, who was being honored at the festival.

The small jet had no first class; that’s why they were seated next to me.  I recognized them immediately when they boarded just moments before take-off — my mother loved the Kennedys like most Catholics of her generation — but I kept my mouth shut.

They were very friendly, though, and chatted with me during the short flight.  When they realized I was going to the festival as well, they mentioned their friend Garry — by first name only — and said ‘perhaps they’d see me there.’

It was a great story to share with my co-workers, who were seated elsewhere on the plane.

I attended the Doonesbury retrospective and only made the ‘Kennedy connection’ when Bobby stepped up to the podium to introduce ‘his friend Garry.’  After the event was over, attendees were invited to a gallery next door exhibiting framed “Doonesbury” cartoons.

As I was milling around with my co-workers, I suddenly heard shouts of  “Carla!  Carla!”

There across the room were Mary and Bobby Kennedy, smiling and waving.  Garry Trudeau stood at their side.

The rest of the evening was kind of a rock star moment for me.  I got to hang with the Kennedys for a little while.  I met Garry Trudeau, whose comic strips explained the entire Watergate phenomenon to me as a child…and I was able to get his autograph for my brother Kent.

And best of all?  The look on my co-workers’ faces.