Talk to each other

For more than a decade, I have taught classes to university students and corporate clients alike, emphasizing the importance of communication.

But the cautionary tale on tonight’s Project Runway team competition drives the point home better than any workshop or one-to-one coaching session. 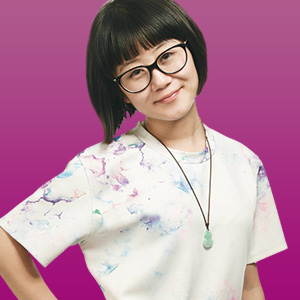 One team’s inability to communicate — about anything — led to a truly terrible garment and a very expected exit for one (since her partner had immunity).

Sorry Hanmiao — but you kinda had it coming.

It’s summer, and that means a lot of reality show competitions have been added to the TV schedule.

Food Network Star has been cookin’ with gas on Sunday evenings for several weeks already, and my beloved Project Runway got underway this past Thursday.

I never realize how much I miss them until they come back on they air, and then, when they do —

The day the music died 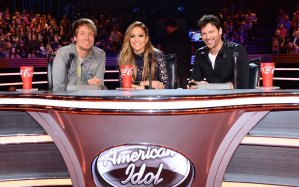 American Idol is being canceled?

I feel such strong emotions  — or I’m trying to, anyway — so I must breakout into song, like any decent musical would:

(My apologies to “American Pie.”)

You are leaving
I am grieving
in a ugly rage spiral

Sure, I’ve spent my nights
watching your network rival, singing — 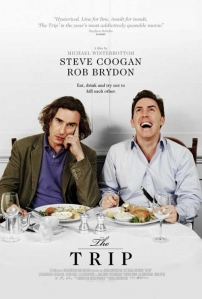 It’s been almost 20 years since Meg Ryan and Tom Hanks put Manhattan’s Upper West Side on the map in the rom-com classic You’ve Got Mail.

Visit my neighborhood today and all the movie’s sights are still here — the local restaurants where they rendezvoused, the farmer’s market, Riverside Park. Everything but her little Shop Around the Corner. 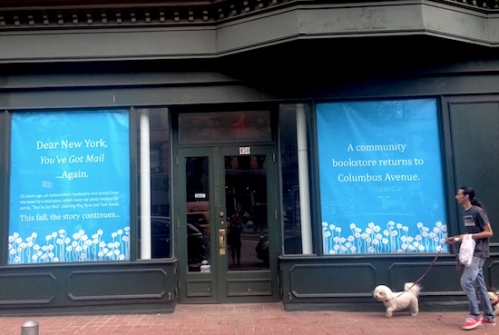 Book Culture is opening their doors literally around the corner from my brownstone apartment and taking up the ‘small bookshop mantle’ that Meg’s character abandoned lo’ those many years ago.

Their window says it best: 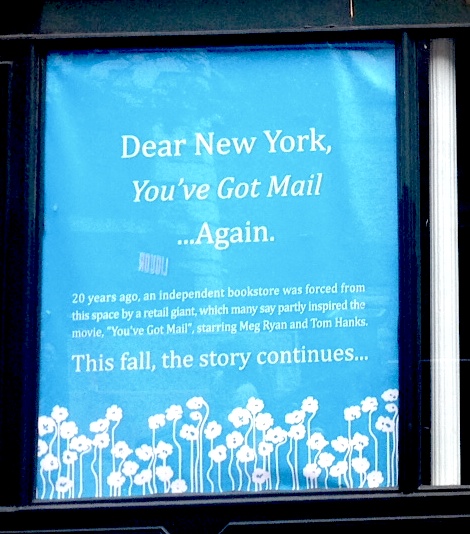 Now, the modern version of the movie’s ‘big bad Fox Books’ exists today — Barnes & Noble is just a couple of blocks away.  So it will be interesting to see how this small store will compete on selection and pricing.

But I for one am excited to see life imitate art just feet from my doorsteps.

Wonder if the proprietor will be as photogenic?

I have been verbally spanked by more than one person for my lack of enthusiasm for the World Cup.

I’m not a soccer fan. To become an SSF (Sudden Soccer Fan) because of the frenzy surrounding the event doe not feel authentic to me. 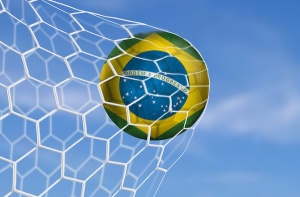 To add insult to injury, I’m writing this post during the US / Portugal World Cup match.

Which I’m not watching.

Don’t get me wrong — I truly hope the US wins — but it’s still soccer.

I’m okay with getting the score later. 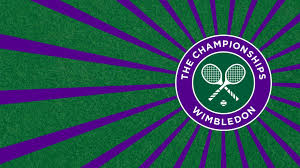 In other sporting news, the Championships Wimbledon begin tomorrow, where many Americans will be competing on its famous grass courts.

I love tennis and will be watching as much coverage as my schedule allows.  I won’t verbally abuse you, however, if you have other plans. 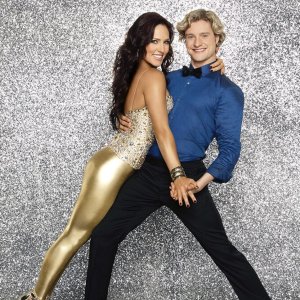 If you were on Twitter at all on Halloween, you may have noticed that one of the trending topics was #potterday.

It seems the fans of the Harry Potter books and films were chatting them up, and why not?  On a holiday where ghosts and goblins walk the earth, talk of wizards and death eaters seems apropos.

But when I read the potterday tweets — and added one of my own (heck, I like Harry as much as the next muggle) — I noticed a few felt it necessary to slam “Twilight” in the process:

“Who needs vampires?  We have magic.”

Why do you have to dislike “Twilight” to like Harry Potter?  Are the two mutually exclusive?  Why is life always a competition?

It reminds me a bit of my youth.  (Yes, I can remember back that far.)  When “Star Wars” came out, many “Star Trek” fans — and I am pointing the finger straight back at myself  — were insulted by the very presence of this new saga and boycotted it.  Years passed before I saw “Star Wars” in its entirety, and that was mainly because of Harrison Ford.  He was big time by then, and I wanted to see his take on Hans Solo.

In retrospect, it was a ridiculous reaction.

I think the same thing about the Mac/PC wars.  I own a PC, and always have — mainly because an overwhelming majority of the business world operates on PCs.  I have worked on a Mac in the past, and I personally didn’t find the transition from PC to Mac to be difficult.  I think both platforms have their pros and cons, and I am entertained by the vehement love/hate that people display for the different platforms.

I just don’t see it.

And I love Harry Potter and “Twilight.”  To me, they are very different and are not competing or attempting to muscle one another out at the box office.

Can’t we all just get along?