Now you see it, now… 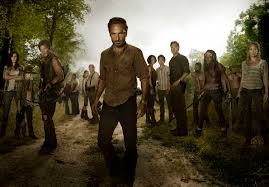 You are so successful, you don’t have to listen to anyone, let alone a sticky blogger.

But I think you could learn a lot from the methods employed by the director of Pride and Prejudice and Zombies.

True, it’s a costume drama first and a zombie movie second, but zombies are its reason for being…although any Pride and Prejudice fan will recognize dialogue and plot lines that have been carried forward from the original text.

Except the zombies. They’re new. But they’re not in-your-face gory. 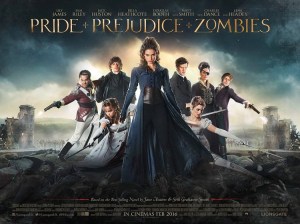 Well, their faces are half gone, and some limbs are missing, and your standard bloody-gutty zombie fare. But when the Bennett sisters expertly slay the zombie hoard — they trained in China — it primarily occurs off-camera.

Instead of watching blood and guts and gore spew forth, we get to see their expert swordplay and marksmanship. It’s really very fun.

And I for one didn’t miss feeling queasy one little bit.

Remember when television shows used to suggest violence instead of shoving it in our faces?

A shadowy suggestion or quick camera cut would leave the evil deads to our imagination.

I still prefer it.

Some of my favorite cable programs have been stabbing their victims repeatedly of late…and showing the murders up close in graphic detail, the horrible sound of knife piercing flesh as disturbing as the imagery.

I am still bothered by the bar scene in the season finale of The Divide, and the scary clown in American Horror Story: Freak Show isn’t the only character to brandish a knife.

Avoiding gore is one thing.  Forgetting it is almost impossible.

It’s a blizzard out there.

So I did what the weather demanded — saw a triple feature at AMC Theatres: Warm Bodies, Identity Thief and Side Effects.

Hands down.  No competition.

Zombie movies normally aren’t my thing.  But this is no average run-of-the-mill zombie flick.

Sure, there are zombies shuffling about, covered in gore, on the lookout for brains to eat.

But Warm Bodies is a love story — how meeting one girl helps a zombie learn how to become human again.

It’s sweet and laugh-out-loud-funny — although not everyone in the theater today seemed to get it — and an obvious metaphor about society’s ills.  But what really killed me is that the oh-so-cute zombie I was jonesin’ over was portrayed by Nicholas Hoult, who played the little kid in About a Boy.

Thinking about seeing The Woman in Black, starring Daniel Radcliffe, this weekend?

The Sticky Egg was at the theatre first thing this morning to bring you this review.

Plus, I don’t see scary movies close to bedtime.  I’ve learned that lesson the hard way. (Remind me to tell you about my Blair Witch Project fiasco sometime.)

The Woman in Black is my favorite kind of horror film.  The ghosts are scary, but they pretty much stay in one place — in this instance, an old haunted house in Yorkshire at the turn of the century.  There’s also no gore.

Daniel Radcliffe, who has joked about being cast as Harry Potter because of his ‘orphan eyes,’ uses them to full effect here as a still grieving widowed lawyer sent to the haunted manse on business for the former owner.

Once there, he sees the legendary Woman in Black and soon children in the village begin to die in horrific ways.

I love the look of the film — so gray and cold.  I kept burrowing under my coat to get warm in the theatre.  Radcliffe disappears into the role as well; you won’t confuse him with Harry here.  The film is well paced, building slowly and eerily towards it climax.

Or what you think is the climax.

I’m not going to see ‘Inglourious Basterds.’  On principle.

I love movies….all kinds of ’em.  I try not to write off any genre or actor or director because I think you miss out that way.  In fact, I’ve lectured people when they do that very thing.  (For example, I believe a lot of people missed out by writing off ‘Twilight.’  If you still haven’t seen it, rent the DVD.  You’ll thank me.)

But I have given Quentin Tarentino quite a few chances, and he and I just don’t see eye-to-eye.  I know many critics and moviegoers love his point of view and his creativity…and I don’t dispute that he has a definite dose of both.

But I think filmmakers like Tarentino and Eli Roth — who directed the irresponsible torture film ‘Hostel’ (that Tarentino produced) and who also stars in ‘Basterds’ — are doing us all a disservice by splashing around such unholy gore in their creations.

If we can sit through such blatant displays of death and dismemberment and not be affected, what does that say about us as human beings?  And why then are we surprised that teenagers are killing each other in high schools?  Or that professional football players are choking the life out of dogs with their own hands?

We as a generation are becoming numb to overwhelming displays of violence.  It’s something that we laugh at…and cheer on…and give five-star ratings to, as in the case of ‘Inglourious Basterds.’

Don’t get me wrong; I love the idea behind the film.  A Jewish revenge fantasy against the Nazis?  Brilliant.  But in the hands of Tarentino — in just the glimpses that I have seen in the trailer — ‘Basterds’ is a gore fest that I choose not to support or applaud.