When I was a humor editor at Hallmark Cards back in the day, part of my job was to read greeting card copy and look for any possible innuendo.

Was it dirty or gross? Could people take it wrong? Especially it if was unintentional, it was my job to suss it out. 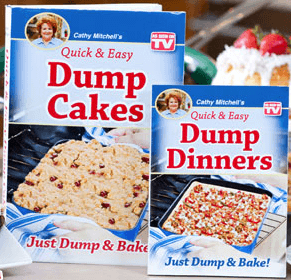 Apparently the writers of these cookbooks don’t think that way.

“Dump” to them only has the one meaning…to ‘drop heavily or suddenly,’ which appears to be their intent.

But every time the infomercial airs — and it airs a lot —

I’m afraid a very different and unappetizing meaning for ‘dump’ comes to mind.

What do you see here? 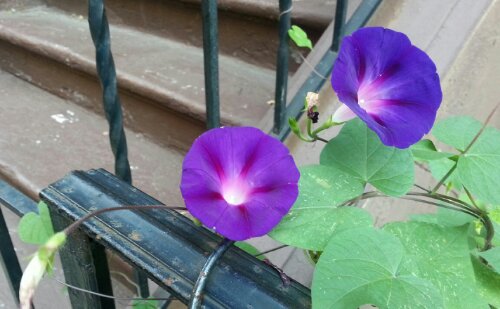 Two flowers? Some greenery? A railing and steps?

You obviously haven’t worked at Hallmark.

When I see flowers in pairs, I think “that image would work well for love, engagement,  wedding, parents…or even mother and child” (if one bloom is noticeably smaller than the other or is a bud).

The same goes for groups of flowers. Or leaves. Or tree branches.

Even though I left Hallmark over 12 years ago, I still look at scenes in nature and put a card caption on ’em.

I think I may need a get well card.

Cute as a button

When I worked at Hallmark Cards, I had the good fortune to work with a lot of very talented writers and artists.

Maura Cluthe was one of ’em.

She has her own website now — with a shop where you can buy posters, prints, books, buttons and stickers featuring her distinctive artwork.

Look at that face — gotta love those big, angelic-yet-mischievous eyes.

I wonder if she gives volume discounts? 🙂

Google made them this way cool doodle. 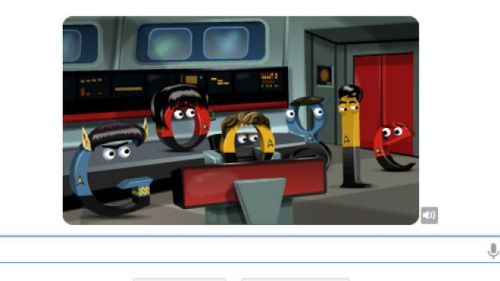 I didn’t get them anything.

But to be fair, they didn’t post their birthday on Facebook…so I’m just now hearing about it.

I do wish them many warm regards.  They are younger than I thought. I hope they don’t take offense at that comment.  It just seems like they were always on the air when I was a kid.

I started watching Trek at first because my brother did.  I thought he was cool. I wanted to be cool.  So I watched.  Then it was about the series…so much so that when Star Wars came around, I boycotted it on principle.

When I worked at Hallmark Cards, I developed a line of Star Trek cards.  I even did a focus group on Deep Space Nine — got a bunch of guys from IT to help me flesh out the offering.

I was very sad to learn that Mary Kennedy, wife of Robert Kennedy, Jr., was found dead yesterday at his home in Bedford, New York.

I met them years ago on a plane, and liked them both very both.  So the loss seems very personal.

Below is the blog entry I wrote in 2010 about my Kennedy encounter.

I read today that Bobby Kennedy, Jr. filed for a divorce from his wife Mary. That’s too bad.  They seemed like such a nice couple…

When I met them.

Yeah, you read it right.  I met Bobby and Mary Kennedy.  They sat next to me on a flight from Denver to Aspen.  We were all en route to the 2nd Annual US Comedy Arts Festival. I was on a research trip for Hallmark Cards; Bobby was going to introduce Garry Trudeau, his good friend and creator of the “Doonesbury” comic strip, who was being honored at the festival.

The small jet had no first class; that’s why they were seated next to me.  I recognized them immediately when they boarded just moments before take-off — my mother loved the Kennedys like most Catholics of her generation — but I didn’t let on.

They were very friendly and chatted with me during the short flight.  When they realized I was going to the festival as well, they mentioned their friend Garry — by first name only — and said ‘perhaps they’d see me there.’

It was a great story to share with my co-workers, who were seated elsewhere on the plane.

I attended the Doonesbury retrospective and only made the ‘Kennedy connection’ when Bobby stepped up to the podium to introduce ‘his friend Garry.’  After the event was over, attendees were invited to a gallery next door exhibiting framed “Doonesbury” cartoons.

As I was milling around with my co-workers, I suddenly heard shouts of  “Carla!  Carla!”  There across the room were Mary and Bobby Kennedy, smiling and waving.  Garry Trudeau stood at their side.

The rest of the evening was kind of a rock star moment for me.  I got to hang with the Kennedys for a while.  I met Garry Trudeau, whose comic strips helped Watergate make sense, and I was able to get his autograph for my brother Kent.

And best of all?  The look on my co-workers’ faces.

Can any good come out of a dare?

Only friendships that last a lifetime.

A couple of decades ago (when I couldn’t have been more than five), a good friend and colleague at Hallmark Cards dared me to audition for an improv troupe in Kansas City called Lighten Up.

I accepted the challenge, was shocked to be chosen for their workshops, and soon found myself performing on the Lighten Up stage.

The next five years of my life were cast.  Every Friday and Saturday night I was on that stage.  And the players who I performed with soon became some of the best friends of my life.

They still are to this day.

That’s why I’m thrilled to rejoin the original members of the Lighten Up Improv Company tonight in a reunion performance.  Many of us haven’t done improv in years, so the show should be funny on many levels.

But hanging out with my best friends?

In the words of Trish Berrong, ‘that’s just stupid fun.’

I’m as shocked as you are.

Yesterday was International Monkey Day, the one day each year that we celebrate all things simian.

But I got distracted by work and travel and missed all the monkey business.

Funny thing — people always accuse Hallmark Cards of ‘creating’ holidays.  Although there’s no proof of it, I wouldn’t be surprised if they are behind Monkey Day.  Goodness knows the monkey has been good to them.  Put a monkey on a humor card, and it always sells.

‘Cause monkeys are funny.  I mean, just look at that face.  Dude deserves his own day.

(Hope it was happy.)

I worked for Hallmark for over seven years and didn’t know that Sweetest Day — that’s today — was all about candy.

I’m not sure how I missed that.

But now that I do, my Saturday — and this holiday — has a whole new sense of purpose.  And my menu for the day is all planned.

Care to join me?

Comic Con is in full swing this weekend in San Diego.  And I’m not there….again.  So, I’m bitter.  Again.

I know, I should stop my whining and get my butt out there.  I mean, seriously — even Hallmark Cards has a booth.  And I know them!

But instead, here I am in Boston, spending my entire day making a living. 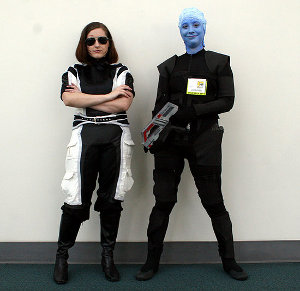 Perhaps that’s really me behind those dark glasses…sporting a sexier version of Star Wars stormtrooper gear.  (The black inserts are slimming, don’t you agree?)

And any girl will tell you when your best friend has blue hair, the guys are gonna look your way.

Or perhaps that’s me in full costume dressed as a…well, as a…cat? With Harry Potter taped glasses, even.

I do have green eyes, and although I’m not a big fan of pink hair on a normal day, I think the green and gold jumpsuit saves it.

A cat superhero?  I can get behind that for a day.

Yes, maybe ‘being’ at Comic Con is just a state of mind.  Maybe being a geek is enough.

A geek that whines — goodness knows I’m working that so far.

Today is a holiday that I’m pretty sure Hallmark didn’t invent.  There are no cards or e-cards to send.  The banks are open.  The mail is scheduled to arrive.

But it sounds like a fun one to celebrate, nonetheless.

Today is ‘National I Want YOU to Be Happy Day,’ the most unselfish holiday of the year. 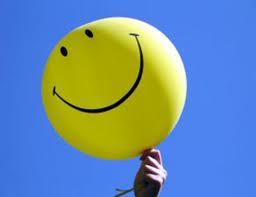 The goal?  Think about little things you can do to make other people happy.

Smile at passersby on the street.  Pay a compliment.  Do a small favor.  Buy a surprise lunch for a friend or co-worker.

Yes, those would all make me happy.

But I have to admit…when I hear the phrase “I want you to be happy,” it sounds more like a blanket acceptance of the choices a person has made —  a promise to no longer judge a person’s lifestyle just because it is different from my own.

Ya know — that would probably make people even more happy.

Perhaps we should all give that a whirl today, too.