Too close for comfort

Did you read The Handmaid’s Tale in high school as I did?

The dystopian work of fiction was horrifying to my teenage self but far-removed — nothing I could realistically see occurring in my lifetime.

Now every event portrayed in the television adaptation that dropped yesterday on Hulu — only three episodes, quite frustrating for binge watchers like me — seems like a warning of things to come if we are not vigilant.

Women universally stripped of their rights to work and own property, then treated as property and debased. The LGBTQ community hanged for simply being. It is terrifying and dressed up as a return to traditional values.

I signed up for a free trial to Hulu just to watch this series. I think everyone should.

He really is ruggedly handsome!

My sister and her husband stayed home last night — on a Friday night, no less — to watch the sci-fi classic Serenity starring Nathan Fillion.

It was a gift from me. 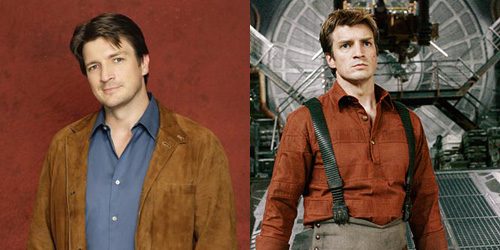 Not the movie itself — I’m sure they caught the film on Netflix or Hulu. No, their fascination with ‘all things Fillion’ started during their Christmas vacation with me here in New York City.

I took them to a Broadway show. To Jazz at Lincoln Center. To movies and restaurants and shops. Santa even visited my apartment.

But the gift that has continued to ‘keep on giving?’  An impromptu Castle marathon on the last day of their trip, when we all agreed that lying on the couch sounded like fun.

The day Lou and Chuck discovered the charms of Nathan Fillion.

Now they are catching up on episodes of Castle and learning all about his past as Captain Mal in Firefly and Serenity.

I love to watch an obsession come together!