I was clicking through the cable channels this Sunday morning and happened upon one of my favorite Jim Carrey movies, Bruce Almighty, at the exact moment that Bruce — enjoying his God-like powers by this point — tells his dog to use the toilet instead of going outside. 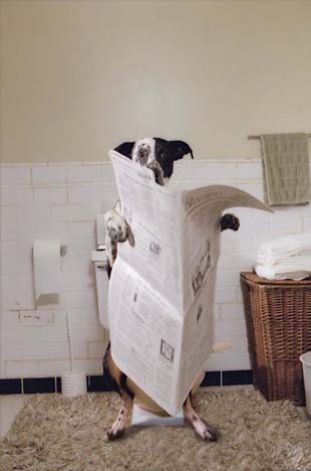 The image at left may have been doctored a bit, but if you’ve seen the film, the dog walks up to the tank, steps on the seat, does his business, flushes and even puts down the lid in deference to the ‘lady of the house.’

Now that I have an older dog in the house with more, shall we say, unpredictable pee pee patterns, I totally wish I had bought a little kiddie toilet and hired a dog trainer to teach him how to use it.

It would so rock.

He already reads the newspaper, of course.

Columbus Day is a weird holiday.

I mean — if I worked in an office, I’d love the day off as much as the next person.  But celebrating the life of a man who enslaved and tortured Native Americans is a bit distasteful.

So today I pay tribute instead to a different holiday  —

Thank you, Canada, for so many amazing celebs who entertain us all in television and film — 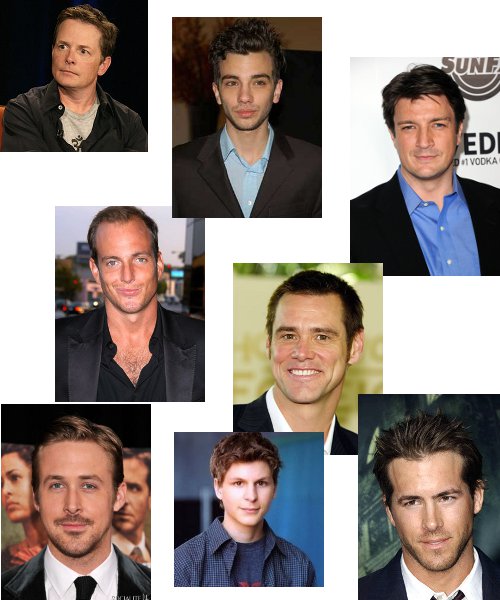 I’m know there are also female Canadian actors to be thankful for, but hey — it’s my blog.

Although I might not have agreed with who got what award at this week’s Emmys, it was, as always, amazing to see so many truly funny people gathered in one room.

Even the nominees in the Drama categories are pretty darn hilarious when they let go.

So when I saw the news today that Canada has issued stamps with the name and likeness of five of their great comedians, I had two immediate reactions: 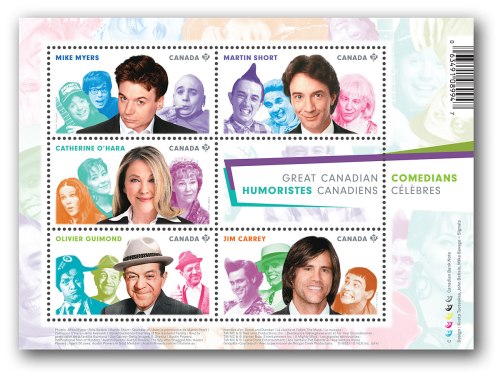 Turns out the US Postal Service did do something similar back in 1991 — a booklet of stamps honoring the comedy greats of days gone by.

When I saw these stamps, I had two immediate reactions:

Do you see a pattern?  More importantly, do you agree?

What current ‘funny folk’ do you think deserve to grace the correspondence that we don’t send via email?  Vote in the comments!

File this one under:

Brilliant self-promotion most people don’t get

Even seasoned media outlets like the Chicago SunTimes were shaking their heads at Carrey’s online profession of love for actress and comedienne Emma Stone.

Who’s the hottest actress on the planet right now?  Emma Stone.  So if you’re Jim Carrey and you’re trying to draw attention to your TruLife website, who are you gonna target?

Is the video weird?  Sure.  Is it funny creepy?  Uh, yeah.  Is everyone talking about it?

And that’s exactly what Jim Carrey wanted.  So, for the SunTimes to say Carrey’s video love note “falls flat”…

…means the jokes on them.

Meredith Vieira left Today earlier this month to spend more time with her family.  (She said she wouldn’t miss that early morning wake-up call, either.)

Kudos to Meredith for knowing that exiting the show was the right thing for her.

I wonder if Matt Lauer needs some time for that same kind of personal reflection?

I was avoiding the news programs this morning — they were full of Teddy Kennedy’s death, and that made me sad — so I clicked around and stumbled upon “The Truman Show” on TBS. I haven’t seen that movie in years and had forgotten what a wonderful, dimensional performance Jim Carrey gives as the man unwittingly trapped in a TV show.

So, where does “The Truman Show” rank in Carrey’s long list of movie roles?  Here’s my take.  I’d love to hear yours.

1. “Bruce Almighty” — Carrey is the god of comedy.

2. “Fun with Dick and Jane” — A perfect pairing with Tea Leoni

5. “Dumb and Dumber” — Stupid, but cemented my fanaticism

1.  “Eternal Sunshine of the Spotless Mind” — Proved Carrey could give a controlled, vulnerable performance.

2.  “The Majestic” — The critics be damned!  I loved his innocence and patriotism.

4. “Doing Time on Maple Drive” — You might have missed this one; catch it on cable.

I’ll probably get some crap about “The Majestic,” but I felt that was one of the most underrated — no, make that critically abused — movies ever.  In my opinion, it was this generation’s “It’s a Wonderful Life.”  If you haven’t had the pleasure, add it to your NetFlix queue.