Oh, what a beautiful morning

I started my Sunday morning cleaning the apartment while watching Les Miserables on HBO.

It was my third viewing.

I obviously love the film, but I know there are many naysayers who poo-pooed the movie adaptation — because of changes made to the story and perceived imperfections in the songs because they were recorded live on set.

How dare emotions choke their voices.

But for those who question Hugh Jackman’s pipes in Les Miz, take a gander at his performance in the 1998 Royal National Theatre’s production of “Oklahoma!” in London’s West End, for which he earned an Olivier Award for Best Actor in a Musical. 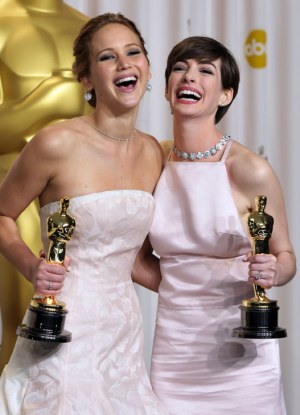 But whereas the world loves Jennifer, most folks find Anne just…so annoying.

Both are talented actresses.  Both gave Oscar-worthy performances this year — Jennifer in Silver Linings Playbook and Anne in Les Miserables. And both are attractive and smart.

But of the two, only Jennifer appears comfortable enough to stop acting…to be herself on the awards show stage.  So her speeches — and even her trip up the Oscar stairs — appear to be authentic expressions of emotion.

Not badly acted attempts at sincerity.

So stop it, Anne…or we’re taking all the shiny trophies back.

No zombies for the zombies

The 2013 Oscar nominations for Best Director had just been announced — the words were still hanging in the air in a cartoon word balloon — when Steven Spielberg announced his plans to suspend production on Robopocalypse.

I’ll bet Anne Hathaway, who was nominated for Best Supporting Actress and slated to star in the long awaited sci-fi extravaganza, seconded the notion.

No doubt she and Spielberg — both frontrunners for their work in Les Miserables and Lincoln respectively — remember what happened to Eddie Murphy a few years back.

He was considered a sure thing for the Best Supporting Actor Oscar for his role in the movie Dreamgirls…and then Norbert happened.

The nominations this year have shown what a old group of fuddy duddies the Oscar voters can be.  (No Best Director nod for Ben Affleck and Kathryn Bigelow — are you serious??)

Not guilty at all

“Guilty Pleasures” week on Dancing with the Stars has been fun on a couple of levels.

(Yes, I am just now catching up on DVR.)

First, it’s fun to see what cliche songs ‘speak’ to the celebrities.  The theme to Titanic.  Copacabana by Barry Manilow.  Disco anthems.

Which leads to the second thing I enjoy — imagining what song I would select in the same circumstance.

The Barry Manilow song catalog would be a good place to start, although probably one of the love ballads like Ships or Weekend in New England.  Or maybe I would pick a hit from the Kansas ‘Point of No Return’ album.

I thought they were very deep at the time.

Or we could always pull out the soundtrack to Les Miserables.

Bring Him Home should score a ’10’ with the judges.

Not the character in Victor Hugo’s novel Les Miserables — the Jean Valjean that I have most often seen on stage, actor Colm Wilkinson.

Colm originated the role of Jean Valjean in London’s West End and again on Broadway.

When the show transferred to New York City in 1987, Actors’ Equity wouldn’t allow Wilkinson to play the role because he wasn’t American.  So producer Cameron Mackintosh refused to open the show.

Luckily for all of us, Actors’ Equity quickly changed their minds.

Les Mis is one of the reasons I love Broadway today. I’ve seen the show an unprecedented 13 times, most recently a couple of years ago at an anniversary performance here in New York City.

The theatre was smaller, and the show scaled down from its original glory.  But the story was just as moving, the music still thrilled.  And as I sang each word, albeit under my breath…

I could hear Colm Wilkinson singing.