The Egg ain’t no Twitter, but today — on the national release date of “Going the Distance,” starring Drew Barrymore — I have the perfect excuse to talk up an actor who has been one of my fav’s for years: 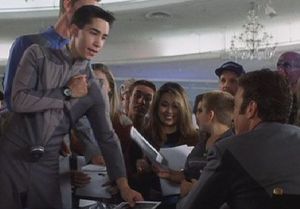 I remember Justin’s very first film —  “Galaxy Quest,” that wonderful send up of the “Star Trek” series.  Although he was 21 at the time, Jason was cast as teenage sci-fi nerd Brandon, who helps save the cast of a space TV show when they have to play their roles for real to save an alien culture.  (It is way funnier than that sounds.)  The cast includes Tim Allen, Sigourney Weaver and Alan Rickman, and it is genius.

Next, Jason played another geeky high school kid in the TV series “Ed,” starring Tom Cavanaugh.  That gig lasted four years, so he able to flesh out the role and make it more three-dimensional.  I loved that show — it was an amazing ensemble — but when it ended, Justin went on to play versions of that same lovable, slightly geeky guy in a series of movies.

Then he became the MAC guy.

That person seemed a bit cooler and less nerdy (even for someone talking computers).  And while you might think a role with that kind of visibility would move his career forward, it seemed to stall it a bit.

As he described in an interview, ‘it’s hard for the MAC guy to play a cowboy in a western.’

So, I’m really excited to see “Going the Distance.”  Many of the top critics are saying good things, and the trailers look really funny.  Plus, I think it could mean good things for Justin’s career in the years to come.

Because I want only the best for my friend.