One of the first movies that kept me up at night was a version of Mary Shelley’s Frankenstein that I saw during my grade school years on a late night ‘creature feature.’

I’ve searched IMDB.com to no avail, trying to locate the specific retelling. But I do have a memory of the final scenes — Dr. Frankenstein destroying himself and his monster. And the monster says, “Well done, master.”

No wonder I had nightmares.

There’s yet another remake of the classic story, starring James McAvoy and Daniel Radcliffe, coming out at Thanksgiving time .

This one looks like as much fun as fright. I’m in!

The word of the moment is…

I’ve heard it used over and over this week.

On last night’s episode of Scandal — in what was arguably the line of the night — James said, “You’re a shameless monster!” to Cyrus….to which he replied, “Who loves you dearly!”

Well, that makes it all better.

And I just read this morning that Bob’s Burgers own Kristin Schaal, who provides the voice for bunny-eared Louise, sold a sitcom to ABC called — what else — American Monster.

Plus, there’s a #monster hashtag on Twitter floating around that links to all kinds of scary posts and pics.

Legen — wait for it — dary creature

Here’s one monster you won’t find at the San Diego Comic Con this weekend…. 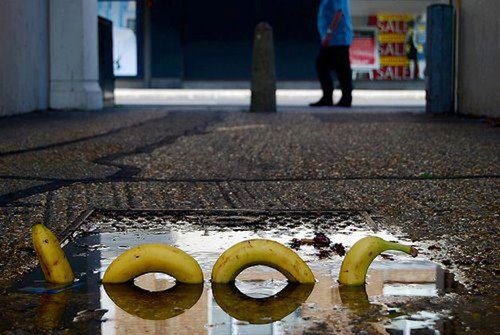 Website imgur.com says the much feared, very fabled fruit was first spotted almost 12 months ago, but this is my first sighting.