Do what you love

That way, they can do the kind of work that they want to be doing. 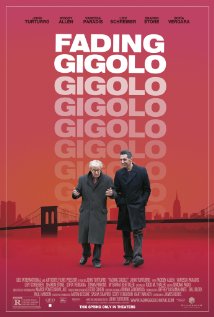 He wrote, directed and stars in Fading Gigolo, the story of a guy with money problems who, with the encouragement and salesmanship of a good friend — portrayed by Woody Allen — finds himself the hired lover of a group of lonely middle-aged women.

The movie was very funny at times, and at other times, very serious and soulful.  The changes in pacing and tone were unexpected and unexplained.  I felt like I was watching two movies that didn’t quite gel, and there were jokes that flew over my goyish head that cracked up the rest of the art house crowd.

That being said, I enjoyed the individual performances and getting glimpses of my Upper West Side businesses and doorways in this very New York City film.

On the surface, Hit and Run doesn’t look like a message movie.

But then again, I didn’t really go to learn anything.

I like the story of how this little movie, written and directed by Dax Shephard — who also stars in the film with his girlfriend Kristen Bell and a lot of his friends — was made for a song and then got picked up by a major distributor and is now in theaters.

The little engine that could.

So while the plot isn’t my normal cup of tea, I went to see it to support indie film making…and actors that I enjoy watching.  And then this tiny sub-plot pops up half-way through the movie —

A message for dog owners, no less.

How you shouldn’t tie up your pets outside stores and restaurants where they could easily be stolen.  And the big difference the type of food you feed your dog makes, both in their health and happiness.

And who taught these lessons in the movie?

The “bad guy”…in a really funny way.  It’s worth the price of the film just to see this short segment.  I applaud Dax for finding a way to make those points in such an entertaining fashion.

Here’s hoping folks get the message.

Is Seth Rogen too ‘goofy’ to play Green Hornet? 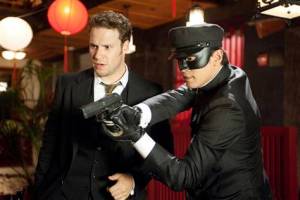 I didn’t read the comic books as a kid, but I’ve heard enough anecdotally to know his casting is a serious digression.  Seth also co-wrote the film, which appears to take a more lighthearted approach to the source material to better suit his comic persona.

But is ‘goofiness’ really the issue here?  I argue it’s more a question of intellect. 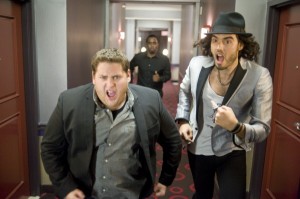 Case in point:  Jonah Hill, who teamed with Russell Brand in the hilarious Get Him to the Greek, is a Seth Rogen-esque film comedian in looks and stature.  Where I believe they differ is their perceived intelligence on screen.

Both can be as silly as all get out, but  Jonah’s characters can be funny and smart.  When Jonah gets out of whatever fix he’s in, it’s believable that he came up with the solution.

Seth, on the other hand, always seems a bit confused and dull-witted.  His humor has a certain charm, but it is defined by his limited mental abilities — a quality which seems to inhabit every character he portrays.

A goofy Green Hornet is one thing.  But a Green Hornet who is stupid?  Who needs Cato because he can’t figure things out on his own?