It’s summer, and that means a lot of reality show competitions have been added to the TV schedule.

Food Network Star has been cookin’ with gas on Sunday evenings for several weeks already, and my beloved Project Runway got underway this past Thursday.

I never realize how much I miss them until they come back on they air, and then, when they do —

I am looking forward to tonight’s Oscar broadcast for three reasons.

2. This awards season desperately needs a surprise winner. In any category.

Please, Academy, be the organization that flabbergasts me with a shocking turn of events, shaking me out of this year’s numbing sameness.

3. Much like the Super Bowl, the Oscars commercials are increasingly becoming an event unto themselves. I am particularly excited to see a new ad by Stonyfield Yogurt,  where woman actually admit to not liking Greek yogurt.

I knew I wasn’t the only one out there.

We know he already was.

They also shot NPH in a variety of poses with the coveted statuette…which can mean only one thing.

Neil — your Oscar is so…tall!

(My apologies to the Academy.)

I approached yesterday’s matinee performance of Hedwig and the Angry Inch with my share of doubts.

Not about Neil Patrick Harris — he can do anything.

But drag performers are the latest rage on Broadway. Last year’s Tony-winning Kinky Boots gave them both their entrance and their legitimacy. The decision to put up the revival of Hedwig now seems a bit like ‘joiner’ behavior.

Not gonna judge it sight unseen, though…especially with Neil at the helm.

The first few numbers are fast and fun and full of Neil’s familiar charm and humor, so it’s easy to think you’re just watching him do  fantastic drag.

Then Neil simply disappears as Hedwig’s story takes center stage, one filled with loss and love, pain and power, disfigurement and metamorphosis.

Neil is supported on stage by a great rock band — one guy is from Lexington, Kentucky! — and Lena Hall, who also won a Tony for her drag performance.

But the show is all about Neil.  All about Hedwig.

Keep calm and don’t carry on

I’m watching the Tony Awards, hosted by the phenomenal Neil Patrick Harris, and as always I am blown away by his ability to do it all. Sing. Dance. Tell a joke. Perform magic. And, most importantly…

Have a sense of humor about it all.

But once the Tony winners start taking the stage, that goes right out the window.

Take the lovely Judith Light, who won the Tony for Best Featured Actress in a Play.

She graciously thanked everyone in the American Theatre Wing, the voters, her cast and crew, the box office workers, her family, her manager and agent, etc, etc.

And then she started talking to the theatre community.  Got all hyper-earnest and intense.  You could see sweat start to glisten on her upper lip, and veins pop out on her forehead.

And I just wanted to say, “Judith, chill.  Let’s get some perspective here.”

I mean, I had a letter to Sports Illustrated published in the mailbag of the June 10th issue, and you don’t see me standing on a street corner making speeches about it.

I just discovered a sport that I’d be great at…

It’s part of the “Big Appetites” collection by Seattle photographer Christopher Boffoli. I learned about the series just this morning in a Twitter recommendation from everyone’s favorite human Neil Patrick Harris.

All the photos in the collection feature tiny people in a world of big foods, which is fun to look at, sure — but is also a whimsical representation of our obsession with all things food.

I have discovered the next Broadway hit.

It happened last night, quite by accident, while I was still basking in the glow of Sunday’s incredibly entertaining Tony Awards.  (A lineup of stellar performances + The Book of Mormon’s awards domination + the incomparable Neil Patrick Harris = GREATNESS.)

I plopped down on the couch for an evening of sloth, and what did I find on HBO?

Did you see it?  This 2003 romantic comedy was an homage to the 1960’s sex comedies starring Rock Hudson and Doris Day.

In Down with Love, Renee Zellweger plays a bestselling author who advises her readers to ‘give up men,’ a credo much at odds with journalist Ewan McGregor’s playboy lifestyle.  The two get involved in a relationship that is not what it appears.  Hilarity ensues.

I love this movie.  The script is smart and funny and filled with double entendres.  (These are my people.)  In one scene, the two leads work out separately yet together via split-screen; the effect is very, very naughty.

The costumes and set design are amazing as well.  The characters live in a New York City that alternates between cotton candy pastels and race car brights, not unlike the world imagined in this year’s Broadway smash How to Succeed in Business without Really Trying.

I imagine Down with Love as a musical; the movie was not, although Zellweger and McGregor did sing the title song over the movie credits.  And both can sing.

Oh, to have Ewan McGregor on Broadway.  Tony-winner David Hyde Pierce was in the movie version as well.

This may be my best idea to date.  Let’s bring Down with Love to the Great White Way!

The Tony Awards are tonight!

As excited as I am to see the incomparable Neil Patrick Harris host the festivities, and watch performances from the most exciting lineup of nominated shows in years… 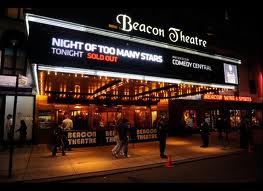 You see, the Tonys are in my ‘hood this year, at the Beacon Theatre on the Upper West Side.  You may remember it as the site of Comedy Central’s Night of Too Many Stars, A Benefit for Autism, hosted by Jon Stewart.

Rory and I happened upon that red carpet quite by accident.  A small crowd of people had gathered on the sidewalk across the street from the red carpet, so we stopped to see who we could see.

Most of the celebs got out of their cars and went straight into the media tent, but a few acknowledged the crowd.  Amy Poehler and Will Arnett waved.  Jack Black did a high energy running high-five.

And Jimmy Fallon kissed my dog.

I was holding Rory in the crush of people.  Jimmy was shaking hands and working the crowd — this was right before Late Night went on the air.  When he stepped in front of me, he said “Your dog is so cute,” and then kissed Rory right on the mouth. 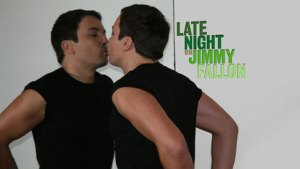 Success will do that to a person, I guess.

“Regis is here!” — Regis Philbin (anytime he walks into a room)

We all knew the day was coming.  But Regis Philbin’s announcement yesterday that he plans to leave Live with Regis & Kelly at the end of the summer was still a shocker.

David Letterman — who has poked fun at the man more than anyone on television — called Regis while taping last night’s Late Show to lament his decision.

Personally I applaud Rege for leaving before he ‘needs’ to… for retiring while he still loves the job and while the audience — and the industry — still loves him.  Now executive producer Michael Gelman must find not just a new co-host, but the right co-host, to join Kelly at the Live desk.

I think we know how I feel about this.

Way back in November 2009, when Regis had heart surgery and was out for six weeks, I made my preference known.

And still today, I will accept — without too much whining — only one of the following to sit by her side:  Neil Patrick Harris or Anderson Cooper.

Anderson just signed a deal to host his own daytime talk show, so I would think that takes him out of the running. Which can only mean one thing….

If Gelman has a brain in that yoga-toned body of his, America will soon be waking up to the next great morning show: 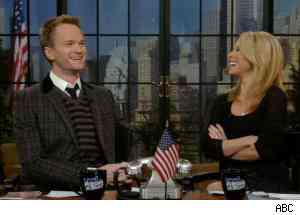 Live with Kelly and Neil Patrick

It will be legen — I’m still waiting for it — dary.

Has Neil Patrick Harris died?  Is Hugh Jackman on walkabout in Australia?  Have Steve Martin and Alec Baldwin had a falling out?

I mean, Jimmy’s a great guy, and he’s done some funny pieces for his late night show (the “Lost” parody and “Robert is Bothered” to name a few).  But hosting the Emmys?  Have you seen his opening monologues?  The dude is a joke reader, not a comedian.

Last year we had the multi-talented, host extraordinaire Neil Patrick Harris.  This year, we get the stripped-down, laughs at his own jokes, ain’t-ready-for-this-by-no-stretch-of-the-imagination Jimmy Fallon.

That’s right — the Leno effect.  The play-it-safe, middle-of-the-road, celebration of mediocrity-over-humor that Jay Leno has perpetuated in this country.  The ‘less offensive is more desirable than creative’ choice.

We saw how well that worked out at the White House Correspondents’ Dinner, now, didn’t we?  (I’ll shut up.)

Thank goodness the Golden Globes had the balls to book Ricky Gervais as its host for the second year in a row.  Of course, they are the Hollywood Foreign Press.  Perhaps they are immune…or have a vaccine.