The movie Foxcatcher, starring Steve Carrell, Channing Tatum and Mark Ruffalo, is based on a true story. That’s about all I knew — well, that and Carrell wears a prosthetic nose.

And we all know a fake schnoz can land you an Oscar. Just ask Nicole Kidman. 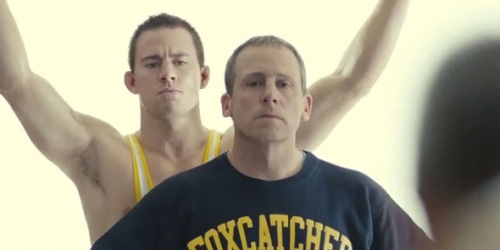 After seeing the film, I’m glad I was so uninformed.  This telling of Olympic wrestler Mike Schultz’s relationship with his sponsor, millionaire John du Pont, is so slow and deliberate that I might have lost patience if I had known how it was going to end.

But the performances — not the plot — are the reason to see this film.  All three actors disappear into these characters who, with the exception of Ruffalo, struggle with varying shades of mental illness and mommy issues.

And when actors who usually take pratfalls raise their game to this level, you simply have to see it.

Fair warning — you may never look at Michael Scott the same way again.

I rushed to the theatre to see the movie Gravity for two reasons:

The views of space are breathtaking, and the accident that drives the plot drains whatever air remains in your lungs.  I saw the movie in 3D, and its use is at once seamless and highly effective. 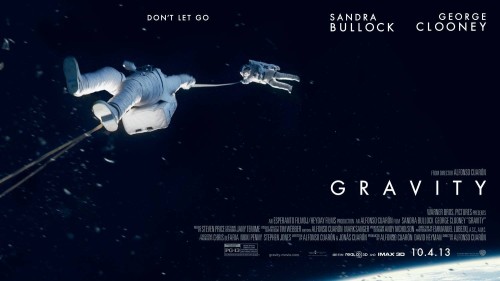 George Clooney is his usual playful self in his scenes with Bullock, but I don’t think it’s a spoiler to say she appears alone onscreen for a majority of the movie.

Tom Hanks goes solo on an island in Castaway, and Robert Redford on a crippled yacht in the upcoming All is Lost, so it’s about time an actress — especially one of Bullock’s caliber — gives it a try.

But while Bullock’s Dr. Stone is well-acted — and I was on the edge of my seat time and time again — I left the movie feeling very little emotional connection to her character.  I just expected…more.

Let me know what you think.

This is all FOX’s fault

I have not read the Fifty Shades of Grey trilogy — pretty proud of that.

Not that I’m judging a book by its cover it…but it’s nice for a change to not be in a group that is being judged.

Although that doesn’t stop me from being interested in the recent casting announcement for the Fifty Shades movie — Dakota Johnson as Anastasia (whoever that is) and Charlie Hunnam as Christian Grey.

She was the quirky, funny, girl-next-door single mom who we loved and lost last season on Ben and Kate.  Well, I loved that show anyhoo.  FOX went and canceled it.

Oh, look how sad they all are. 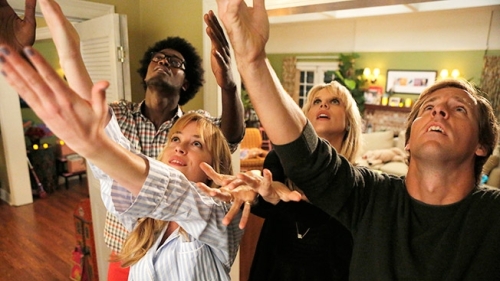 Of course, Nat Faxon (far right) reached out and got an Oscar for writing The Descendants…and directed, wrote and co-starred in the very funny The Way, Way Back with Steve Carell, so he’s doing alright.  And Dakota gets…whips and chains?

Look what you did, FOX.

If there was ever any doubt, The Way Way Back confirms:  Steve Carell can really act.

Because in this movie, our favorite nice guy plays an  out-and-out prick. 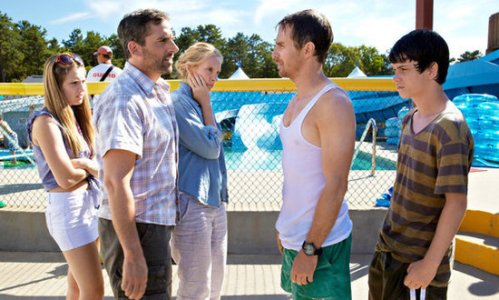 But he’s not the central character in Way Back.

This movie made me smile for a lot of reasons.

Sam Rockwell is a surprising, endearing water park manager and surrogate father to Duncan.  Nat Faxon and Jim Rash — who won an Oscar for The Descendants screenplay — wrote and directed his movie as well…but I was mostly happy to see Nat’s goofy face return to the screen after the egregious cancellation of his sitcom Ben and Kate.  And most of all, it was fun to see a movie about water slides…

…after a weekend of 100 degree weather.  Heaven.

I’m not one to typically notice movie scores. And that’s not the reason I decided to watch Pride and Prejudice on E! tonight. 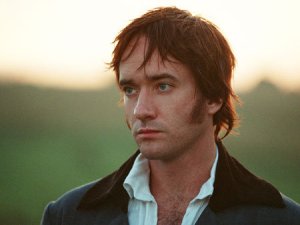 I have Matthew MacFadyen to thank for that.

But as I watched the Jane Austen classic for the umpteenth time, it was hard not to appreciate the music that underlies each scene — not telling us how to feel, simply providing the perfect accompaniment to the action. 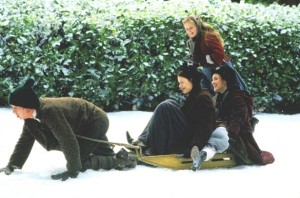 I had a much more immediate appreciation of the score to Little Women when it was released in 1994. In fact, I bought the score before I bought the movie — an almost unheard of action on my part.

The music that accompanies the news of Beth’s death is in and of itself a showstopper. 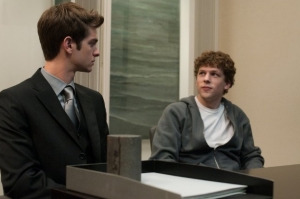 And more recently I loved the soundtrack to The Social Network, which won a well-deserved Oscar.  I remember being excited that the same composers were doing the score for The Girl with the Dragon Tattoo.

Which makes me think I pay more attention to movie scores than I originally thought.

From page to screen

I can’t believe it. 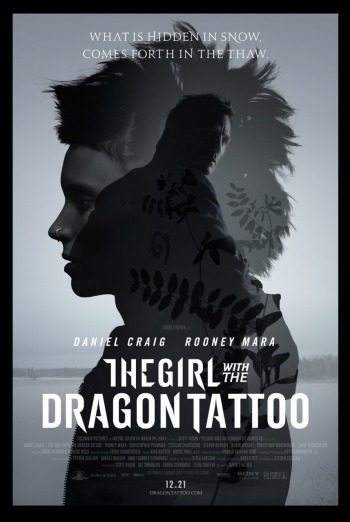 I’m actually excited about the premiere of The Girl with the Dragon Tattoo.

After slogging through that relentless tome of a book, believe you me, it’s nothing short of a miracle.

Several factors have come together to make me want to be one of the first folks in the theater.

1.  Whereas most books are better than their on-screen interpretations, the Tattoo movie can’t miss.  The English translation of Stieg Larsson’s bestseller was front-loaded with the most mind-numbing tedium imaginable before getting to the action that propelled readers through the rest of the book.  Stieg even found a way to make the ending slow.

Based on director David Fincher’s reputation and the killer trailers I’ve seen to date, I think it’s safe to say he hasn’t adopted the author’s penchant for pokey pacing.

I’m also psyched to hear Tattoo’s musical score is the work of Trent Reznor and Atticus Ross, who penned the brilliant, Oscar-winning score for The Social Network.  In fact, the score for The Girl with the Dragon Tattoo has already been nominated for a Golden Globe Award.

Of course, Tattoo has a great cast.  And I’ve already mentioned the intense trailers.  Some critics have even applauded the film for sticking closer to the book’s original plot line than the Swedish version did.

Closer to the book?  I don’t want to know!

I have posted something every day since I first ‘turned on the lights’ August 20th of last year.  Looking back, it’s kinda fun to remember why. 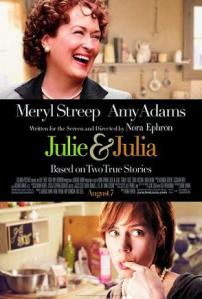 Earlier that same month, the movie “Julie & Julia” opened to rave reviews.   If you didn’t see it, it told the story of a New Yorker named Julie who, frustrated with her dead-end temp job, decides to cook all 524 recipes in Julia Childs’ “Mastering the Art of French Cooking” in one year and blog about it.  Julie’s quest and Julia’s life story are artfully intertwined in the movie, which earned Meryl Streep yet another Oscar nomination.

I saw the film opening weekend (shock, shock), and as I walked out, I overheard many people planning to cook fabulous meals the movie had inspired.

I just wanted to write a blog.

In the film, Julie’s daily blog chronicles her culinary successes and failures as she plows through Julia’s cookbook.  By the end of the movie, it has earned her faithful followers, a feature in The New York Times, and a book deal.  (Obviously, the movie later followed.)

After a year of writing The Sticky Egg, I too have faithful followers, and I look forward to their visits and comments.  I also have learned the discipline that a daily writing deadline requires — even one that is self-imposed — and have really come to enjoy it.

In fact, if I didn’t write a little something-something every day, I would miss it.

So, The Egg continues into year two and beyond.  And who knows?  That book deal could be just around the corner.

But back off, Meryl — I’m playing myself in the movie.

There is nothing I love more than watching a movie and discovering a hidden gem.

You know — that actor or actress who’s the friend of the lead who looks kinda familiar but you can’t figure out where you’ve seen ’em before.

It’s one of my favorite pastimes.  Ask my friends.  I’m actually pretty annoying about it.  So I cannot believe that I totally missed this one. 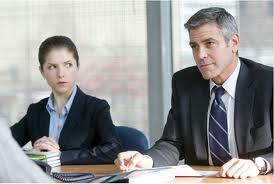 After seeing Anna Kendrick play Jessica in three “Twilight” movies and nab a much-deserved Oscar nomination for her work in “Up in the Air,”  it was only this week during publicity for her upcoming stint in “Scott Pilgrim vs. the World” — opening in theaters today — that I realized that I had seen her years ago in a little movie musical called “Camp.”

I think I hear my friends laughing at me…. 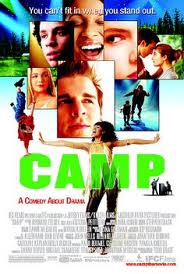 If you haven’t seen it, “Camp” is about a summer camp for theater geeks.  Anna plays Fritzi, a wallflower who attaches herself to the camp diva…or so it appears.  At the end of the film, when all the campers are performing at the big gala for the parents, Fritzi sabotages the diva and steps in to sing her big number, “Ladies Who Lunch,” blowing off the roof in an incredible performance.

Of course, I didn’t know it was Anna then…just that there was this HUGE voice coming out of a teeny tiny little girl.

And that little girl was Anna Kendrick.

Well, knock me over with a vampire.

There are a lot of wrongs in the world of entertainment.

– Jay Leno returning to “The Tonight Show” after almost single-handedly running NBC into the ground.  (Oh wait, he had help from Jeff Zucker.  Good point.)

– “American Idol” torturing us with weeks of painful auditions.  Just get to the competition already, and let America decide!

Today I do not complain; I only celebrate.  For two great rights have occurred in the entertainment industry.

Sure, “30 Rock” and “Mad Men” won “Best Comedy” and “Best Drama” as expected, but seeing the brilliant “Modern Family” get the recognition it deserves bodes well for the years to come.  “30 Rock” may finally have some real competition in this category.

I couldn’t be more happy.

More good news for followers of Twitter’s “Shit My Dad Says.”  It’s being developed for television, and who has been cast as My Dad?

None other than William Shatner.

I would guess he was at the top of the casting wish list, and I can’t think of a better self-effacing comedic actor to do justice to this crazed persona.

See?  Sometimes entertainment gets it right.