No beans about it

(It’s kinda like the $40 a Day series that Rachael Ray did way back when, but with less scratch.)

He’s in Cleveland in tonight’s episode, and he’s eating chili for lunch. 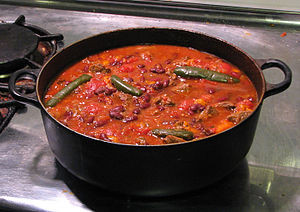 Now I love chili, and today’s dramatic drop in temperatures makes it sound especially good.  I don’t have any chili on me, but I am really enjoying watch him eat chicken chili from Palookaville Chili in Cleveland.

But he made a curious claim during the program.

He said chili is usually the “B-film of food.”  It’s canned stuff.  It goes on hot dogs.  It’s not the star.

Chili is king.  And was king long before Jeff won Food Network Star.

Let’s show it a little respect.

You’ve been my favorite night of television all summer.

But last night The Glee Project wrapped, with Damian and Samuel winning the right to a seven-episode arc on the prime time version of Glee.

In true gleek fashion, the Irish import and the Christian rocker prevailed to share the crown.  The other two runners-up also received  two-episode stints on the show.

Even Cameron, who left the competition early because he didn’t ‘fit in,’ was voted fan favorite.

Everyone’s a winner on The Glee Project.

And last Sunday, Food Network Star also came to a close, with fan favorite — and my choice from early on — Jeff Mauro the Sandwich King getting his own show.

The first episode aired yesterday morning, and it was pretty slick, thanks to the Food Network production team.  I think Jeff should settle in quite nicely.  (As he pointed out himself, he is ‘kinda cuddly.’)

So now Sunday nights are left to only the critters and crazies on True Blood.

Granted, there is enough insanity on that one show alone to carry Sunday night.  But I will kinda miss all the DVR juggling — and Twitter avoidance — I had to manage to watch all three programs without having outcomes or plot twists spoiled.  It made the vast wasteland that is the Monday-thru-Friday’s-of-summer a little easier to bear.

Everyone who’s psyched for premiere week, raise your werepanther!