I laughed and laughed at The Campaign this afternoon…which is really no surprise.

What made me laugh was. 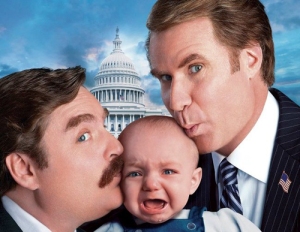 I  expected Will Ferrell and Zach Galifianakis to be funny.  Their take on two candidates for a US Senate seat in North Carolina was over-the-top and out-of-control.  No issue was off-limits. No person, place or thing (translation: animal) was safe if their misuse provided a potential positive bump in the polls.

But for me, the surprises kept this movie from being your standard comedy.  Things the trailer didn’t reveal.  Cameos it didn’t spoil (and I won’t either).  The promos even used some alternative footage so that the real punch lines weren’t given away before you sat down in the theatre.

What a novel idea.

Probably my biggest ‘aha’ in The Campaign is how much I enjoyed the performance of Dylan McDermott as Galifianakis’ evil campaign manager.  I don’t think of him as a comedic actor, but McDermott stole every frame he appeared in.

The ending was also unexpected.  And I will surprise you now by not giving it away, except to say —