I saw Frankenstein at the Woodford Theatre Company in Versailles, Kentucky last night.

This production is an excellent reminder that local theater can get it right.

There’s death by every manner imaginable — hanging, gunshot, strangulation, beatings — and they all look amazingly real.  Give credit to the special effects designer and crew, and a cast that ‘dies on stage’ in the best way possible.

This is a serious translation of the original text — no campy Frank send-up here — and you have one more night to experience it.

Oh, and if you wonder about that one guy’s bloody, mangled face?

When I was but a wee lass, I watched Dark Shadows every afternoon after school.

It scared the bejeezers out of me. 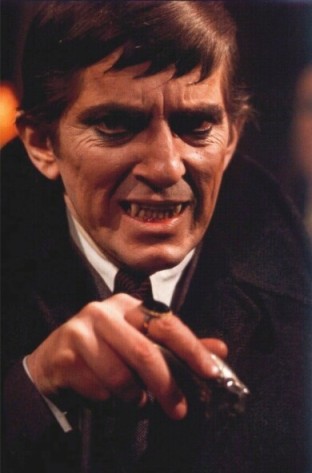 Barnabas Collins, the vampire who ‘lived’ at the Collinwood estate, made me jump out of my skin.  More than once, I had to walk outside into the bright sunshine because I was too spooked to watch what happened next.

So I was particularly excited to see what horrors Tim Burton’s remake would hold, especially with his favorite lead Johnny Depp occupying the role of Barnabas.

The new Dark Shadows is a comedy.

Depp is sporting white makeup a la Charlie and the Chocolate Factory, and the script appears to be one deadpan zinger after another.

True, it’s a dark comedy, and I can appreciate their sense of humor.  I’ll no doubt go see it out of curiosity at the very least.

But I’m sad to say that Depp’s version of Barnabas will never elicit a single gasp of fear or horror.

Except, perhaps, at the 70’s clothing.