It’s no secret that I’m claustrophobic.

There are security guards at the St. Louis Arch who probably still talk about the girl who hyperventilated all the way up the elevator to the top (and wouldn’t go back down…for two hours).

I wouldn’t wish it on anyone. 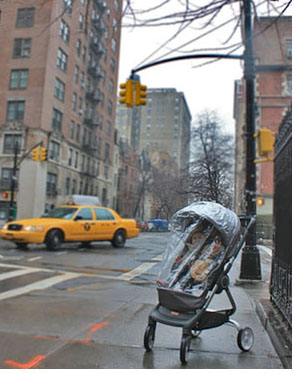 So I am happy to see small children today won’t have any problem at all with small, enclosed spaces…what with their mothers wrapping them in plastic inside their strollers!!

I, on the other hand, am gasping for air just looking at those poor kids.  Don’t they know their oxygen is running out?

And the condition rears its ugly head at the most inopportune times.

Riding the elevator to the top of the St. Louis Arch.  Getting an MRI for a shoulder injury.  Or simply being crowded into the corner of the elevator by one too many people.

But I never thought a facial would freak me out.

I was at a salon today over lunch — indulging in said facial, thanks to a birthday gift card from a generous friend — and the technician completely covered my face with a solid wrap, leaving only a small slit for my mouth.

Needless to say, I panicked.

Once I explained my phobia, she offered to leave a slit for my nose as well.  I still couldn’t see, but I did deep breathing and mind games to remain calm. Not exactly the soothing experience I had in mind…but hey —

I’m having an MRI done today.

My left shoulder is injured (no doubt a result of daily blog postings to The Egg).

When my doctor put in the order with my insurance company, I made sure it said “open MRI” on all the paperwork.  And when I later made the appointment with the radiology center, I  re-confirmed that I was scheduled for an open MRI machine.

I would have to be sedated to go through the tunnel in the regular MRI machine.

Yep, I’m one of those claustrophobic types.  I don’t just talk the talk; I really am claustrophobic.  And unfortunately, my fear of tight spaces has reared its ugly head in public places in the past.

Most memorably, I panicked in the tiny, windowless elevator at the St. Louis Arch.  If you ever been, you understand.  If you’ve never been and you’re claustrophobic?

Of course, going into my appointment today, I wonder if my chart has special notes on it because I specifically requested the open MRI.

Do you think there’s a medical code for ‘wuss?’

So you’d think — by now — Jay Leno — former comedian, current leper — would know that he has seriously missed his cue.  Needs to go.  Couldn’t be less welcome if he had let chili farts in one of the tiny, egg-shaped elevators at the St. Louis Arch.  (Sorry — a couple of personal scars crept into that last illusion.)

NBC asked you to leave, Jay.  And, I’ll admit, they pussied out at the end.  Took one look at that huge, tremblin’ jaw of yours, and just couldn’t do it.  So you stayed, and your new show failed so horrendously in primetime, it pretty much took down the whole network with it.  The affiliate stations, too.  I hear peacocks are endangered now. Live with that.

And tonight, Conan and his staff and his fans become your lastest victims.  To make room for you yet again.  Because apparently, at NBC, there is nothing they like better than a big, fat failure.

I can only hope that the same audience that found your tired, lame comedy lacking in primetime will reject your recycled “Tonight Show” when you return to late night.  And, more importantly, they will say no to your lack of integrity, your lack of fair play, and your serious lack of timing.