Or, more specifically, the movies he directs.

He first caught my attention in 2005 with Thank You for Not Smoking.  Then along came Juno, its oh-so-unique voice the brainchild of writer Diablo Cody.  And in 2009, Reitman brought us the brilliant George Clooney vehicle Up in the Air, my choice for Best Picture Oscar.

Sadly, the Academy was more impressed by tales of the war abroad than at home.  Whatever. 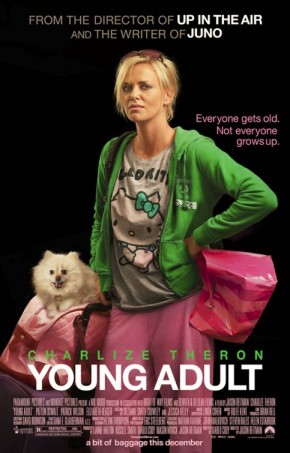 Reitman and Cody have teamed up once again to bring us Young Adult, starring Charlize Theron and Patton Oswalt.

This film has none of Juno’s quirky teen speak; Theron’s character is way past that. This golden girl blew out of her one-horse town years ago and is living large in the big city, a successful writer of youth literature.

Or that’s what it looks like from back home.  Her reality — and the lives of the people she left behind —  are very different than they appear on the surface.

I love this film.  I love the performances that Reitman pulled out of his actors.  I love that he didn’t feel the need to ‘nicen up’ Theron’s character as she continues her path of destruction.

And I especially love the possibility that Oswalt — Patton Oswalt, the chubby standup comedian — might get an Oscar nomination.

Jason Reitman did that.