My friend Joan is gaga for the WB series “Supernatural.”

She’s been watching old episodes the last couple of weeks and posting Facebook status updates filled with longing and anticipation for the new season to begin. 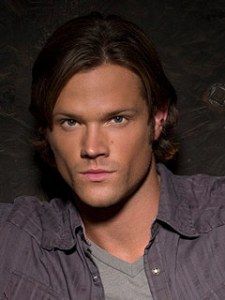 I’ve never watched “Supernatural,” but I am familiar with one of its stars:  Jared Padalecki, who plays Sam Winchester on the show.

Jared used to appear on one of my old favorites, “Gilmore Girls.”  He was Rory’s first boyfriend Dean, one of the most milk toast characters in the history of television.  All Dean did each episode was smile sweetly and moon over Rory, who eventually got bored and dumped him for bad boy Jessie.

Ain’t that always the way.

Jared appears to have manned up a bit on “Supernatural.”   His character Sam is a modern day warrior who chases ghosts with his older brother (named Dean oddly enough).

The only thing Jared’s two TV characters seem to have in common are bad haircuts.  Padalecki has changed his hair style a bit over the past decade, but for some reason can’t seem to find one that complements his very good looking face.

I’m not the only one who feels this way, either.  Yesterday EW.com offered to give him a free haircut for his birthday.  That’s right.  A free haircut…to a guy who works with stylists every day on set.

What gives?  Why is it so hard for Jared Padalecki to get good hair?  Maybe it’s some kinda curse…like the one that befell the stars of “Poltergeist.”

No word from Joan yet on how she feels about all this.  But I’m guessing a new status update may be in the cards.