And apparently, so do the Russians.

The sitcom Everybody Loves Raymond, which was loosely based on the lives of Romano and producer Phil Rosenthal, ran for nine seasons on CBS.  It was nominated for the Best Comedy Series Emmy seven times and won twice.

When they decided to end the series in 2005, it was still in the Top 10, a spot it had occupied since its third season on the air.

Exporting Raymond is a documentary that opened in very limited release in movie theatres last Friday.  It follows Rosenthal’s efforts to produce a Russian version of the sitcom… which is probably even more difficult than you would think.

This isn’t a documentary about Ray Romano.  He’s not in it, except in copious clips from the sitcom.   This is Phil’s baby, and he — who I had never seen on camera before — is hilarious in his own right.

He’s wide-eyed and nervous and tentative.  I definitely saw flashes of Woody Allen in his manner (thankfully without the annoying stammer).  But when it comes to Everybody Loves Raymond and helping it come alive for the Russian audience, he is strong and certain and somewhat single-minded.

Goodness knows he runs into obstacles.  The studios there look like bombed out buildings.  The writers and actors are doing two or three shows simultaneously and have extremely limited time and resources.  And the people ‘in charge’ bring somewhat questionable expertise to the table.

It takes a translator, vodka, a kindly driver, a real Russian family, more vodka, and a bit of give-and-take before the pilot episode is complete.   The entire process is really fascinating to watch.

So, how was the Russian version of Raymond received?  I shouldn’t tell you the end.  (Let’s just say it lives up to its name.)

Battle of the network stars

Premiere week for the fall television season is still a month away, but people are already talking trash on Twitter and Facebook about some of the shows going head-to-head for the first time on the schedule.

One match-up of particular interest to me is Thursday nights at 8:00pm — NBC’s “Community” vs CBS’s “The Big Bang Theory,” which is making the move from its previous home on Monday nights.

When I first heard this announcement, I got kinda stressed.  It’s not like I’ll miss either show; I have a DVR, so I’m covered either way.

The real question is — which sitcom will I watch LIVE?  Which show do I want to get the bigger slice of the ratings pie?

“Community” was one of my favorite new programs last year.  It was strong right out of the gate, and the characters and story lines just got more laugh-out-loud funny as the year went on.  I mean, seriously — did you see the paintball episode?  And Abed’s impressions alone are worth a look-see. 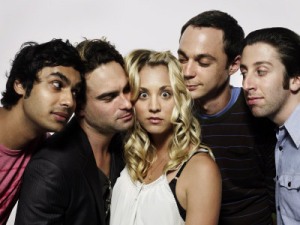 “The Big Bang Theory,” on the other hand, has been around since 2007 and is grossly underrated.  Jim Parsons, who so brilliantly portrays Dr. Sheldon Cooper, has received his second Emmy nomination for Best Actor in a Comedy this year, and I think he just might snatch it away from Alec Baldwin.  The show deserves a nod as well.  It’s one of the few comedies that is still filmed old-school (with three cameras) and is  frickin’ hilarious.  They love their geeks, and it shows.

So, who’s my choice to win?  Old friends vs new?  Cool dudes vs geeks?  Live vs Memorex?

I’m glad I still have a month to decide.

Perhaps you’ve already begun your holiday weekend,  seated at centre court Wimbledon.  Or on a private island whose location you’ve only tweeted to the paparazzi.

Or maybe you’re one of the true working stiffs, stuck in a conference room, trying to resurrect your ratings.

I don’t really care where you are; I just care what you do. 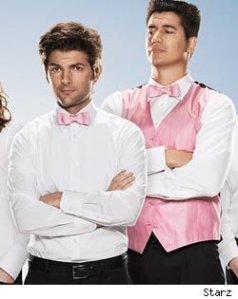 Please save the brilliantly funny “Party Down”…’cause Starz is letting it die.

Sounds like what they really have is a commitment issue….or not enough money to back up their big plans.

I just want “Party Down” to have a second chance…with a network that can afford to keep it on the air.  It’s a far better show than a lot of the shlock that’s out there now — we’re talking absurdly funny, with guest stars used in truly creative ways.

So, come on people — let’s work together and solve two problems at once.  Save “Party Down” and fill one of your slots with quality TV.

Now go out and play.  It’s a holiday, for cripes sake.

Yes, I smiled when I read the official decree…but only for a moment.

NBC confirmed Sunday that after February 12th, “The Jay Leno Show” will no longer occupy the 10pm time slot Monday-Friday.

If you read this blog with any regularity — and if you do, well gosh darn, thanks — you know I started whining about Leno’s new show as early as September.  So, as far as I’m concerned, it’s about time.  The ratings have sucked, and as a result, the local news programs on the local NBC affiliate stations have seen their ratings slide, too.

And more importantly, Leno’s show was just lazy television programming.  We cry all the time about how reality TV is taking over the airwaves.   Well, having Jay Leno attempt to replicate late night programming for an hour each night in primetime was no better.

NBC tried to save money and placate Jay Leno who — for some reason that completely escapes me — the network has decided viewers can’t live without.

That’s the reason I only smiled for a moment.  The network has decided to put Leno back on at 11:35pm for 30 minutes and slide “The Tonight Show” with Conan on after midnight — when the title no longer even makes good sense.

I hate to break it to you, NBC, but one of the reasons Conan’s ratings took a dive was Jay’s lead-in.  Putting Jay back on in late night isn’t automatically going to fix the problem.  And, if Conan has any pride at all, he will tell you take your 30 minute slide and…well, you get the idea.