This space for sale

What a difference a day makes.

Sam Groth, an unseeded player from Australia, was last seen on the courts at Wimbledon in his traditional tennis whites. Nothing to mar the surface except the brand logo.

It is a different story today during his headline match on centre court with Roger Federer.

Note the sponsor patch that has been applied on his right sleeve. There is another out of view on his left arm as well.

Those last-minute sponsorships can earn a player $50,000 a pop.

When you add that to his projected winnings for losing in the third round — it looks that way at this point — Groth could walk away a Wimbledon ‘loser’ with close to a quarter of a million US dollars.

In tennis, the players wear whatever they please, regardless of their seed in the tournament.

That’s why all of us watching the Monte Carlo Rolex Masters tournament on Tennis Channel are experiencing eye strain.

Both players in orange jerseys.

On an orange clay court.

I believe my eyes are bleeding orange blood, too.

All in the family

My friend Leah and I went to the US Open tennis tournament today hoping to see favorite players.

Me, Djokovic at the practice courts. Her, Verdasco in his early round match. We were both successful. (Leah even shook Verdasco’s hand.) 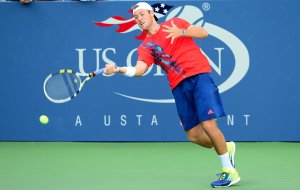 But we did not expect to meet Jack Sock’s aunt and uncle on the train platform on our way back into the city!

They were chatting with friends and were curious about the matches that were still in progress.  And since both of us were intent on our cellphones, they asked for an update.

We ended up talking until we arrived at Penn Station.

I think that counts as yet another sports celebrity encounter — don’t you?

I’ve been watching TV coverage of The Championships: Wimbledon for as long as I can remember, and this is the first time I’ve heard this term used to describe today’s pause in play.

In case you’re not a tennis fan, Wimbledon runs for 13 days — Monday through Sunday — and traditionally does not schedule any matches on the first Sunday.  Today.

After a full week of great tennis, I’m totally spoiled.  In fact, I’m having Wimbledon withdrawal.  It almost makes me wish it had rained a bit more this week, because in the past, they have had to play tennis on Middle Sunday to make up matches.

Of course, they don’t call it Middle Sunday then.  No, the day has to have a new name —

During the brief rain delay in Friday afternoon’s US Open tennis tournament coverage, I switched over and watched a bit of the Deutsche Bank golf tournament from Boston.

They were dealing with some weather issues of their own, and while the commentators discussed past winners, the name “Adam Scott”, the 2003 champion, jumped out at me.

Adam Scott…a professional golf player?  Adam Scott doesn’t play golf.  Adam Scott is an actor.  I knew him first as Henry in the exceptional Starz cater waiter comedy “Party Down,” but he made the leap to the NBC sitcom “Parks and Recreation” last season.

(Good decision on his part, too, because Starz canceled the comedy, the bums.)

So, I checked Wikipedia — ’cause if it’s there, it’s gospel — and sure enough, Adam Scott is a golfer from Australia.  It’s funny, though — when you look at the promotional pics of Adam Scott the golfer and Adam Scott the actor, it’s not immediately obvious which is which (unless you already know).

Take a look yourself. 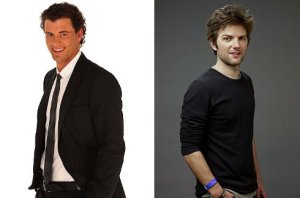 See what I mean?

If you don’t know, there are some clues.  Adam Scott the golfer [on the left] has a killer tan and a bit more muscle definition — he works outside, so it stands to reason.  (No offense intended, Adam Scott the actor.  Chances are, you are much, much funnier.)

An interesting side note — Adam Scott the golfer is no stranger to the movie biz, either; he dated actor Kate Hudson back in the day.

I’m attending the US Open tonight.  Maria Sharapova and Novak Djokovic are slated to play (not each other) on center court at Arthur Ashe stadium.

It’s always a thrill to watch the top seeds LIVE under the lights.

But if you’ve caught any of the tournament coverage to date, you may have noticed a bizarre preoccupation on behalf of the announcers.  Not on stats or seeds or rivalries or revenge.

This year, it’s all about ‘what you’re wearing.’

John and Patrick McEnroe have anointed themselves the unofficial Joan and Melissa Rivers of ESPN2.  They’ve been doling out fashion advice to male and female tennis players pretty much every match. 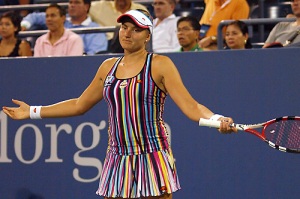 Nadia Petrova’s striped tennis dress was deemed ‘too loud; she really needs to seek out some help.’  They seemed to find her outfit a bigger problem than her defeat to Andrea Petkovic. I’ll admit — the stripes aren’t my favorite, either.  But going on and on about her outfit seemed a bit like rubbing salt in the womb after she lost in a three-set tiebreaker.

Rafa Nadal’s neon tennis shoes were ‘a risk, but a good one.’  They did match his outfit, which I thought was cool since there wasn’t a stitch of white on him.  But his match with Teymuraz Gabashvili of Russia was surprisingly competitive — I would have liked to have heard a bit more about this relative unknown.

Even in Andy Roddick’s late night upset by Janko Tipsarevic, there was as much talk about the many tats that Tipsarevic was ‘wearing’ as the lack of energy in Roddick’s game.

I know this is a change of pace for me.  Here I am asking for depth when shallowness is being offered.

But we’re talking John McEnroe here — the snarliest man in sports telling people how to dress and shape their image on the court.  Granted, both his look and personality have improved with age, but I don’t think anyone thinks of him as a style icon. 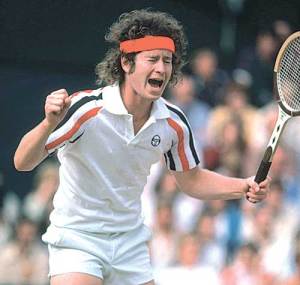 As we say in the country, ‘it’s hard to escape your raising.’